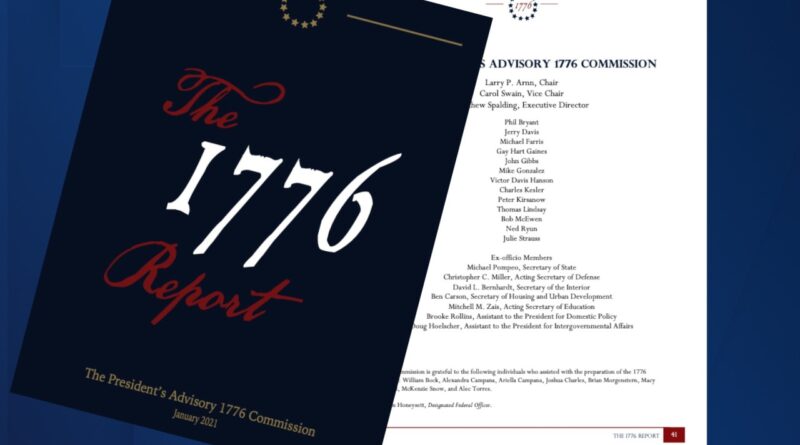 While he was president, Donald Trump created the 1776 Commission, which countered the 1619 Commision that taught American students about slavery. The 1776 Commission was a 18 person advisory committee Trump made to support “patriotic education.”

“The study of history should not be a patriotic exercise. Of course, historical events must be open to critical review and must be looked at from different perspectives, but everything about the 1776 Commission stinks,” stated CVHS history teacher Jeffrey Goldstein.

Trump claimed “the left has warped, distorted, and defiled the American story with deceptions, falsehoods, and lies.”

People have criticized the 1776 Commission because it had no historians on the team but instead conservative activists and politicians. The group’s goal was to rewrite American public school curriculum to make it “pro-American.”

“I think the Commission would have benefited from having professional historians among its members. I would say that it is a dangerous call for a revisionist and apologist version of American history that largely attempts to explain away failures to uphold our founding ideals and principles for all Americans,” said CVHS history teacher Kevin Batchelor.

Two days before President Joe Biden’s inauguration, the 1776 Commission released a 40-page report about how history should be taught in public schools. The report recommended significant changes in how slavery was taught and said that the founding fathers were not hypocritical for owning slaves and telling white men to fight for independence and freedom.

The report states, “Historical revisionism that tramples honest scholarship and historical truth, shames Americans by highlighting only the sins of their ancestors, and teaches claims of systemic racism that can only be eliminated by more discrimination, is an ideology intended to manipulate opinions more than educate minds.”

This approach has been criticized by many historians. Some historians say that the report is all propaganda and not factual.

Some people are disgusted that the report was released on Martin Luther King Jr. Day and said it was an attack on the Black Lives Matter movement. Others believe it “white washes” U.S. history.

“I think the committee was a horrible idea and a perfect example of entitlement because they think just because they are white men, they can just manipulate the history to make a world they like,” said CVHS senior Toxtli Huitzilopochtli.

“As far as whether it changed how I taught history, the answer is no. However, I did bring it up twice with my US History classes since it fit in well with how the study of history is about perspectives and how politicians use it as a cudgel,” exclaimed Goldstein.

One thought on “1776 Commission disappears into history”