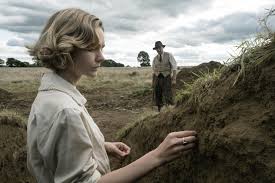 A British widow, Edith Pretty, interested in archaeology hired a self-taught excavator and archaeologist, Basil Brown, to unearth the burial mounds on the land she bought with her deceased husband. Her hunch, thus, brought them to discover an extraordinary find, important to history.

This film was perfectly executed with an amazing story-telling of the events following the excavation. It is a historical drama film that depicts family, secret relationships, heartaches, and dreams strung along with the past, present, and future.

“I’m not sure I agree. From the first human handprint on a cave wall, we’re part of something continuous. So, we… don’t really die,” Brown responded.

All while set during the preparation of World War II, it’s a film about life and death.

I enjoyed watching as everything unfolded and was pleasantly surprised by how good it was. I didn’t expect much from this film before watching but found the description interesting.

The visuals were beautiful and the acting were incredible. Carey Mulligan who played Mrs. Pretty and Ralph Fiennes, Mr. Brown, pulled the whole film together with their exceptional acting. The viewers can feel the emotions through their eyes as history unwinds.

I found that the stories embedded into the film are also very human, it also addresses the issue relating to the class difference.

This film is definitely worth watching, especially if you are interested in historical dramas.