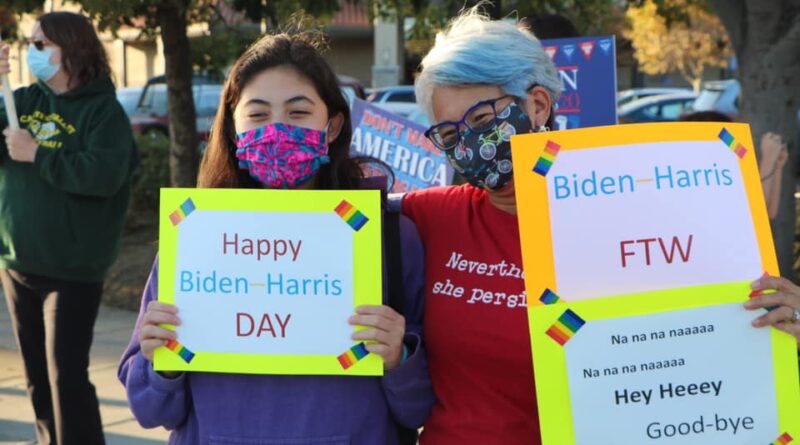 This year’s presidential election has driven an already divided country apart even more, but Joe Biden’s win over President Donald Trump gave a huge sense of relief to a large part of the CVHS population.

“After hearing the results of the election, I think a lot of the country is able to take a sigh of relief. The work is definitely not over yet, but this was a step in the right direction,” said junior Brooke Kundert.

Many here in Castro Valley share that belief. “I’m really glad Trump is finally leaving office, but I am nervous for what’s to come in future months,” shared Leah Janaway, another junior.

With the exception of the 2000 election, this was one of the longest elections America has had. There were tens of millions of mail-in ballots from voters across America with the fear of the ongoing pandemic.

Because of the huge number of these envelopes and rules in some states about waiting to count the votes until election day, it took until Friday, Nov. 7 to determine that Biden would win the Electoral College. Trump disputed the results and challenged the election in court for weeks beyond that.

Democrats were found to be more likely to vote by mail, and Republicans more likely to vote at the polls. Because of this and with the way the ballots are counted, Trump had received more votes by the end of election night, and was quick to claim his victory to a second term.

In the following days, Biden slowly started receiving more and more votes while the mail-in ballots were finally getting counted. This prompted Trump to begin asking states to “Stop the count!” as he wrote on Twitter.

“It’s the idea of disenfranchising people that I find so despicable,” said history teacher Jeff Goldstein about Trump’s behavior. “If we are the democracy we say we are, we should want to count more votes and should do more to incorporate people’s voices.”

While the majority of CVHS students were relieved and thankful Trump will not be reelected for another term, some students agree with his accusations of election fraud against Biden.

“I was a bit surprised by the results because it was really close in the beginning,” said sophomore Anthony Molettieri. “Also, I feel like people jump to the conclusion that all Trump supporters are racist, and that’s not true. Supporting the president doesn’t make you a bad person. Yes he has made mistakes, but we all do.”

“I think this has been one of the weirdest and most obnoxious elections we’ve had and it’s technically still not over,” conveyed Agamroop Kaur, a student who used to live in Castro Valley. “I believe both sides handled it awfully. I think that they should have waited for the full process to carry out before any winner was declared.”