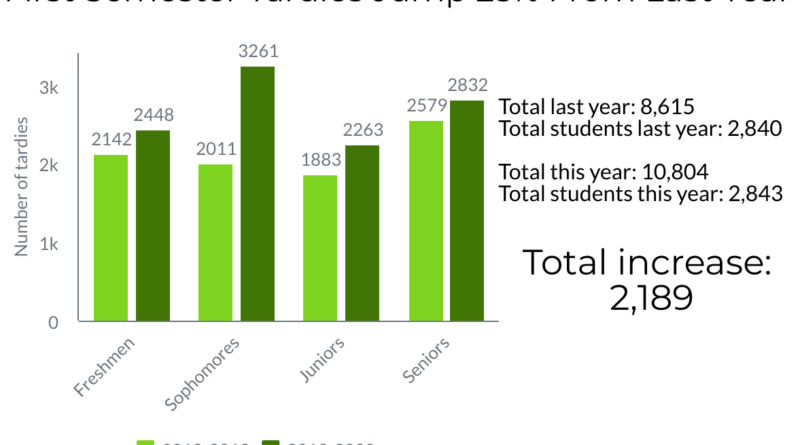 Tardies have increased by about 25 percent at CVHS this school year. Although the school and the attendance office is not sure what is causing this problem, they suspect that it is due to the bigger freshman class this year, as well as allowing the new rule allowing freshman to go off campus at lunch.

Freshmen are not the only problem though. Many upperclassmen have been late to their fifth period class as well. It’s getting to be that time of year when many seniors also start to become lazy in everything they do and think that being on time isn’t a priority anymore due to the fact that they’ll be out of school in a few months anyway.

In the fall of 2018, CVHS students recorded 8,615 tardies. Then in the fall of 2019, students were tardy 10,804 times. That’s an increase of 2,066 tardies, showing this year’s students are starting to care less about being on time and in class when the bell rings.

Sadly this mindset is causing students to have to serve more detentions and Friday school, which no one wants to do.

“I feel like students should handle their business outside of class but also show up to class in order to learn and get this great education that CVHS is offering,” said Attendance Technician Samantha Brown.

Assistant Principal Kevin Baker also had something to say about the rising number of tardies. “I think it’s starting to become more of a problem as the days go on and I believe that something should be done fast in order to limit this number and put more kids in desks,” Baker said.