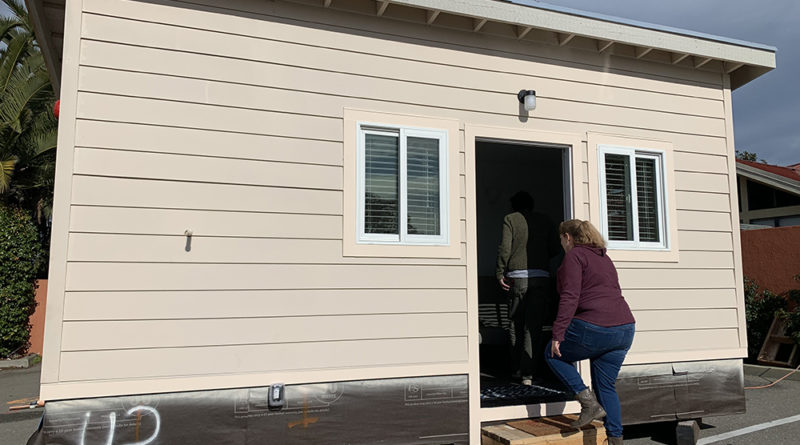 The First Presbyterian Church of Hayward has opened a small group of “tiny homes” as temporary housing assistance for the growing homeless population in the Bay Area. Harris and other church employees, like Chizu Buckalew and pastor Jake Medcaff, have been working on the housing concept for over two years.

“We wanted to do this project to show people that it can be done…To show that we’re not just going to talk about fixing homelessness, we’re going to work on it,” said Laurel Harris as she looked over six units sitting in the church parking lot.

The houses are meant to provide a transitional space for those currently homeless. Abode, a Bay Area nonprofit dedicated to the homelessness crisis, will work with the residents through a case manager to build financial and budgeting skills. The residents must have jobs that earn them at least $1,200 a month and be able to pass background checks to even be considered.

Dozens applied, but only a few will be able to secure housing for the next 18 months, after which they are expected to find permanent residence with the help of Abode and the church.

Rent is required, but in small sums that ultimately get paid back to the resident as a safety net for when they transition into more permanent housing. It is staggered, with $200 payments for the first four months that increases by $200 increments over time. Neither the church nor Abode will see profit from rent money.

The buildings themselves cost the church nothing, having partnered with other nonprofits to build the units offsite and ship them to the parking lot, where they now stand until the first residents arive in February.

This parking lot, which sits right next to Trader Joe’s, stirred up community controversy when shoppers realized there would be less space to park during their grocery runs. Many residents wrote to the Municipal Advisory Council (MAC) and even attended board meetings to protest the placement of the homes.

“That was hard for us…Wouldn’t you rather someone be housed than have easy parking?” said Harris.

Despite these roadblocks, the homes are poised to be in use by February, giving the church an opportunity to prove its effectiveness to nearby lot owners and churches.

“It could really be something big,” said Harris. “A lot of people are hesitant I think because they want to see this succeed first.”

Many eyes of nearby churches and community organizations are focused on the new project, waiting to measure its success before making any moves of their own. If all goes well, the Bay could be seeing more tiny homes cropping up.