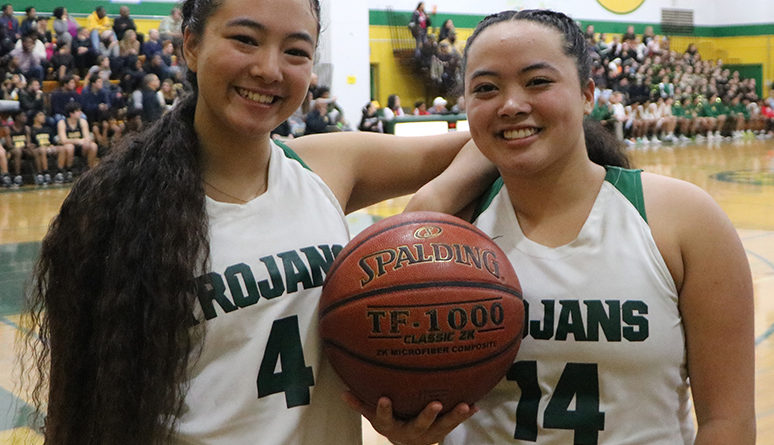 “She’s my best friend. She’s goofy, funny, and understands me,” says basketball player Keilani Yuto about her sister Kellsey. Kellsey calls Keilani her best friend too. Just separated by one minute, the Yuto sisters are a goofy pair, throwing big high fives and bouncing off each other’s energy with laughter and big smiles.

Running down the court you’ll see Keilani and Kellsey frequently pass the ball to each other for the Yuto-to-Yuto assist. With Kellsey hitting the deep threes and Keilani driving the ball in the paint, the sisters are an active threat to any team playing the Trojans.

“We defend each other. I’ve got her back against any ref or other player who’s giving her a hard time. We’ve got eyes everywhere to make sure we can pick each other up after a bad miss or a hard loss,” says Kellsey, describing the bond the sisters share on court.

As each girl drives down the lane and fights for the ball, you will always see the peep of a smile after the whistle blows. The Yutos have been playing for four years now, learning a routine of encouragement and motivation on the court. With that being said, Keilani and Kellsey also emphasize how basketball is only 50 percent on the court.

“Best part of basketball is traveling with the team and being with the girls every day. Team bonding over not just basketball is so important to build our characters that make us play just that much better,” says Keilani.

“They always work so hard. Since I joined the varsity team freshman year, they’ve always been caring, loyal, and picking up players,” commented teammate Lauren Green.

Being the last season together the two seniors are sure to make this one count. Though different in, most distinctively, height and positions on court, the Yuto sisters exhibit exceptional passion for the game. Not afraid to fight for the ball, both Keilani and Kellsey are seen calling plays and diving for the ball. The two say they are excited for their senior night and finishing the season out together representing the Trojans one last time.