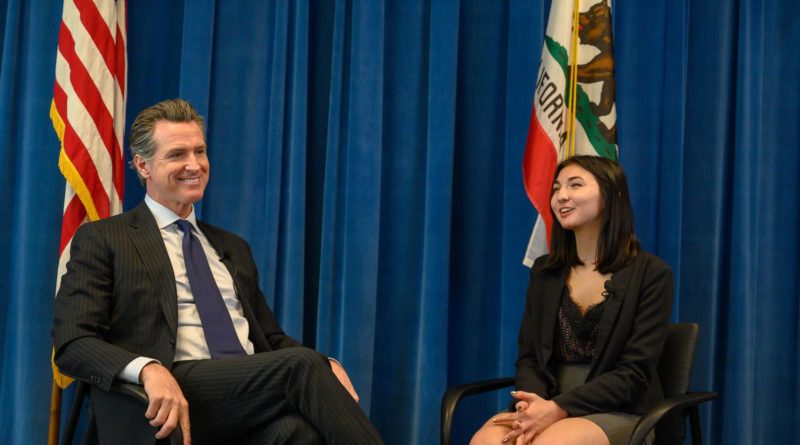 Question: What are you most proud of accomplishing in your first year of office?

Question: How would you assess the state of our public schools?

Newsom: Not where they need to be, but getting better. Since 2011 we’ve seen an 80 percent increase in per pupil funding in the state of Califorina. I’ve put together back-to-back record budgets investing in our K-14 education system, and also providing significant support to our higher education systems, UCs and CSUs. What has been missing in California is a commensurate investment in preschool. The achievement gap really manifests the first day of kindergarten. That’s a big focus for us.

Question: Why is Califorina’s per student spending among the lowest in the nation and what can we do about it?

Question: With later school start times coming, what do you think about shortening the school day so release times can remain consistant?

Newsom: No. Longer school days, get rid of summers! Do you toil the fields in the summer? Do you go back to the farm? You don’t? The point being, we have an old industrial mindset of education. It’s sort of a nonsensical reality that we’re living that’s based upon past practices and not new realities. I support the later start time because I believe in science and I believe the science overwhelmingly bears out that people your age stubbornly have a hard time falling asleep and you have a difficult time waking up. Sometimes you’re still asleep in the second and third period. If you want real education reform, it might not be that more complex than starting school a little later… I think we get too caught up in the new shiny object of eduction reform or some technological solution when it’s really not that complex at the end of the day. For me, a later start time is part of it but I also believe that community schools need to be part of the agenda. I believe we need to meet people where they are and some people need extended learning and extended school days. I don’t think that is necessarily a terrible thing.

Question: How do you plan on ending the vaping epidemic?

Newsom: Well we’ve been very aggressive. I’m supporting a vaping tax, in my budget, to tax vaping cartridges like we tax tobacco. We currently don’t have that. I think we should absolutely eliminate all flavored vaping. The Trump administration, to their credit, went part of the way. We want to go the entire distance. We’ve got to be more aggressive on enforcement. It’s a huge issue and it scares me as a parent with four kids. It’s unacceptable that we have allowed this to manifest on our watch. We own this. We should have seen this coming. I’m very proud to be from San Francisco where I was very involved as a county supervisor and a mayor with anti-smoking strategies.

Question: How do you suggest we address the housing problem in Califorina?

Newsom: In a multifaceted way. We have to own the responsibility of solving the issue. We have to recognize we produce about one fourth of the housing units needed. This is not more complicated then your Econ 101 class. More demand and less supply creates scarcity which increases costs. We are not producing enough housing units. It’s not that complex. The state is not going to socialize that responsibility but we have a responsibility to create the conditions where we can create the private sector investment… You have to hold mayors accountable to meeting their housing element requirements. It’s about accountability, transparency and owning a problem in a crisis and recognizing it took 20-30 years of neglect to get here. We are not going to turn the corner tommorrow, but (we have) audacious goals, 3.5 million housing units in the next decade or so.

Question: Why do you think the state’s gas prices are higher than other states?

Newsom: For many different reasons. We just passed a gas tax a year ago and $3.5 billion of that is being invested in the roads and $1.9 billion in transit. We have traditionally always funded our roads with gas taxes. (There’s also) the nature of how our refineries are operating in our state and a lack of competition and the usorious nature of how we market and brand high quality gasoline and how that comes with a high price and how we as customers are fooled into believing that that is neccessary. I have asked the Department of Justice, our attorney general, to look into some of those gouging prices.

Question: How has the Trump administration impacted Califorina?

Newsom: He’s an invasive species. I’m not a fan of someone who attacks our diverse communities, who tries to deny women equal access, equal pay. I’m not a big supporter of someone who wants to roll back environmental protections and dilute our ability to regulate gun safety. He threatens Californians. We’re involved in 60-plus lawsuits against this guy. You may like his politics, I don’t. I’m going to have the backs of of the people of this state… He’s a bully. I don’t like bullies… I have a deep respect for the Republican Party… Trump represents something completely deviant from the norm. I don’t like it and I won’t embrace it and it’s deeply impacting the county and the world… We’re going through a very difficult time but we will get out of this stronger than ever.

Question: Do you have any prediction about the 2020 election?

Newsom: Yes I predict that I think we won’t know who wins until Election Day. One prediction I do have is that Trump will lose more of the popular vote than he did last election. However I cannot predict the outcome of the Electoral College.

Question: What you do think about running for president in the 2024 or 2028 election?

Newsom: I don’t think about either of those things. No no no no NO!

Question: Now for our toughest question: what do you know about our hometown of Castro Valley?

Newsom: I know Castro Valley well because I am Californian, I am from the region… That said, I haven’t been recently, I feel kind of guilty… but that’s why we’re here together.

3 thoughts on “Gov. Newsom: “We are making progress””