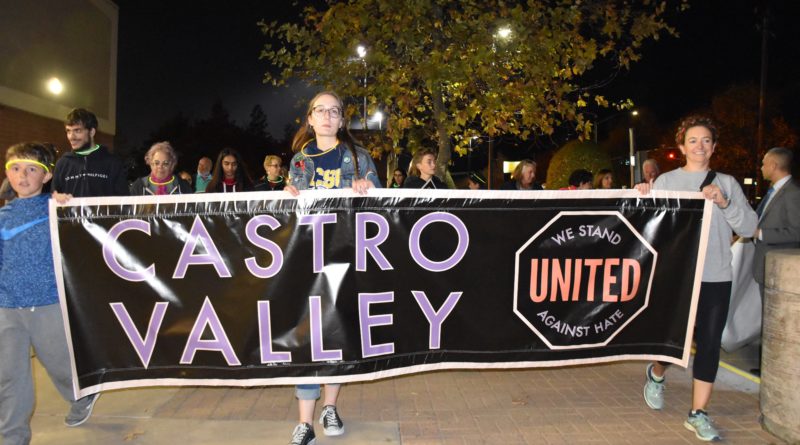 Members of the Castro Valley Community Alliance and Castro Valley residents marched in a unity walk on Monday, Nov. 18 to kick off the Bay Area Stands United Against Hate week.

Superintendent Parvin Ahmadi explained that the goal of the walk was to “show that we value the diversity in our community and advocate for inclusion, kindness and unity in order to combat hate and bigotry.”

The marchers wore glowsticks bands, carried “Castro Valley United Against Hate” posters, and held multiple banners to show their message to passing cars and pedestrians. Multiple police cars accompanied the marchers to ensure their safety as they crossed streets, partly because it was dark when the march began.

After spending some time sharing stories, the marchers started walking around 6 p.m. Dozens of cars honked in support as they marched from CVHS along Redwood Road and down Castro Valley Boulevard, before returning to the school about an hour later.

The United Against Hate movement began in 2017 when several groups planned a counter-rally to a planned white supremacist rally in the Bay Area. Since then, dozens of cities and school districts have joined the movement, placing the iconic “United Against Hate” posters in and around their communities.

The Castro Valley Community Alliance, which includes CVUSD, the District Attorney’s Office, Castro Valley Pride, the Interfaith Council, and other organizations, is one of the many groups that are part of the United Against Hate movement.

As part of Bay Area Stands United Against Hate Week, which lasted from Nov. 17 to Nov. 23 this year, other cities held film screenings, rallies, candlelight vigils, and other community events. Castro Valley also had a poetry and art slam on Wednesday, Nov. 20.

The Community Alliance previously held a unity walk in April 2019 to show support for the victims of the Christchurch shooting in New Zealand and has held various film screenings throughout the year. Part of that walk included speeches by community figures. The next event scheduled is a film screening on Jan. 11.