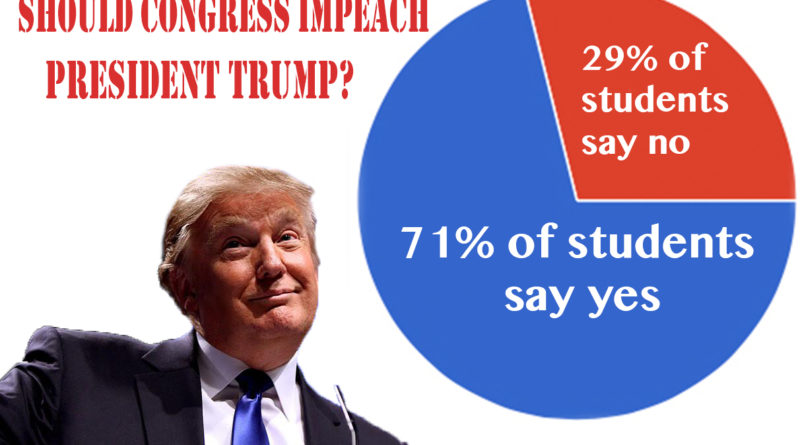 A strong majority of 71 percent of CVHS students support President Donald Trump’s impeachment, according to an Olympian survey of 200 students.

“This president has brought negative attention and distrust to our country,” said junior Colby Bettis.

“We should build bridges to connect each other instead of walls to keep people out,” said junior Frank Andrade.

Trump allegedly pressured President of Ukraine Volodymyr Zelensky, to investigate possible corruption of Democratic presidential candidate Joe Biden and his son. The White House released records of the July 25 phone call. “I would like you to do us a favor,” said Trump when asking for investigations into possible corruption by the Bidens. The Trump administration had earlier put a hold on $400 million in military aid to Ukraine.

House of Representatives Democrats have called that “bribery” and have started impeachment proceedings against Trump.

Removal of the president from office would put Vice President Mike Pence into power.

Experts say removal of the president is unlikely. A majority of House representatives must vote to impeach the president. Then, two-thirds of the members of the Senate must vote to remove him, or else Trump would keep his office. This is improbable because 53 out of 100 Senate members are Republicans.

“It would be hard to impeach Trump because the system is so divided between the two parties,” said social studies teacher Nicole Andrews.

In the transcript of the call, Trump started off congratulating Zelensky with his success in his elections. “We all watched from the United States and you did a terrific job,” said Trump. But he also asked Zelensky to investigate the Bidens eight times.

“President Trump should still be impeached, even if the senate will vote to keep him in office for the rest of his term. He needs to be tried and found responsible for the crimes he’s committed,” said Blair Stephenson, senior.

“He shouldn’t be impeached because he has done nothing wrong…Trump is a great president who has prioritized the American people,” said Ian Hurtado, a junior.

“The man has taken actions that can be accounted as treason … He should be impeached because it’s what our country deserves,” said Kausar Raniwala, a junior.

Only two presidents have been impeached in US history: Andrew Johnson in 1868 and Bill Clinton in 1998. Both won their Senate trials and kept their jobs.

For now, it looks as if the impeachment inquiry will continue, but it is impossible to predict how it will end.