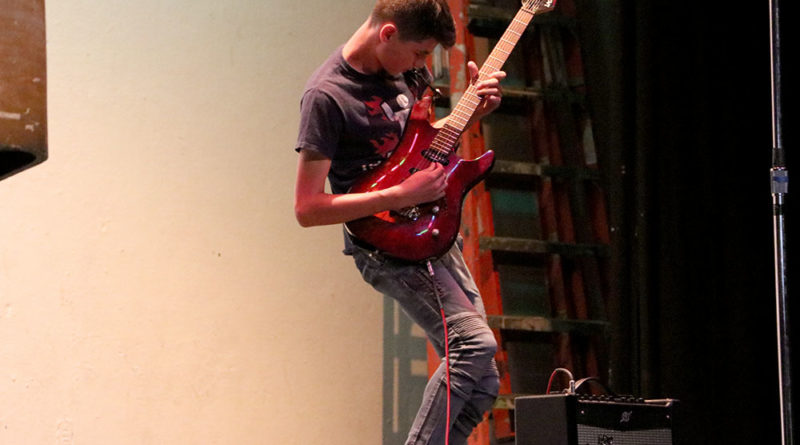 From many entertaining performances, excited audience members, and beautiful decorations, to club fundraisers, lots of food, and 120 guests, it’s safe to say that the CVHS DECA’s Got Talent was a success. The annual CVHS DECA Talent Show was hosted in the cafeteria from 6 to 8 p.m. on Oct. 25.

There were all kinds of unique performances that represented different cultural backgrounds. Lights went out around 5:45 p.m. and almost all audience members were seated and excited for the show to start. The front of the stage looked very aesthetic with lots of orange lights all around. Seniors Darsh Grewal and Devin Green did a great job emceeing as they made sure the audience was engaged and attentive throughout the show through their humorous jokes and comments.

DECA gave other clubs a chance to host fundraisers and advertise their club at the show.

All the performers ended their performances beaming and content.

“It was super duper fun!” said junior Alex Ikuma, who performed a tap dance duet. “I love the DECA officers so much, they made it so easy to perform and I appreciate their hard work. I think it went really well, and the whole night was fantastic!”

First place was awarded to sophomore Sarah Barker, who played the ukelele and sang a song written all by herself, which really impressed the judges. The most popular vote award went to seniors Precilla Lee and Anita Wong who performed a duet song which really impacted the crowd.

DECA advisor and Marketing teacher Michelle Stephens and the DECA officers worked hard to make this show such a memorable experience.

“I thought it was a pretty good turnout. I’m very proud of my officer team for pulling it together. We had a couple of booths for other clubs to be able to benefit and we ended up reducing the cost of that, so they would be able to benefit, so I thought that was really nice. I’m always excited to see the talent that we have at this school and it’s a fun evening for kids to get out and enjoy,” said Stephens.