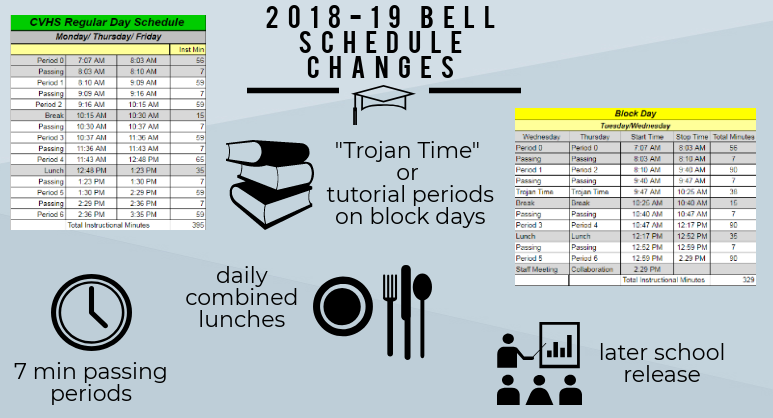 New bell schedules have recently been introduced to CVHS for the first time during the 2018-19 school year. Classes begin at 7:08 a.m. for zero period and 8:10 a.m. for first period, two minutes later than before, and these later bells allow more time for students to get to school on time.

Traditional schedule days now feature combined lunch with freshmen, sophomores, juniors, and seniors all eating together. Because class begins later, these days end at 3:35 pm. Passing periods have also been extended by one minute to accommodate the extended size of the campus that now includes the F wing of classroom portables. Break, too, has been elongated to 15 minutes from 10 minutes, allowing more time for students to eat snacks and socialize before going back into the classroom setting.

Tuesdays and Wednesdays also begin at 7:08 a.m. for zero period and 8:10 a.m. for first period, and end at 2:29 pm. Response to Intervention (RTI), or Trojan Time, has also been implemented this year during select Block Days. In order to keep the release time at 2:29 p.m., the administration will be shortening block periods by 15 minutes or more to accommodate for Trojan Time.

“Trojan Time is looking to focus on schoolwide information and Trojan STAND in the first semester.  As the program expands, the goal is to coordinate students to specific areas of support,” said Assistant Principal Nic McMaster.

Students seem to have varying opinions on this schedule, some for, and some against the new changes.

“I do not like combined lunches because they are too crowded,” expressed senior Sophia Chan. “However in my opinion, longer breaks allow for students to be better prepared.”

Lunches seem to be a point of concern for many students. However other aspects of these schedule changes appeal to the masses.

“This new schedule allows me to relax during breaks, and not rush to class during passing periods,” stated junior Nathan Liu.

These newly implemented aspects of the school schedule mark the start of a new year, and the beginning of a new CVHS.