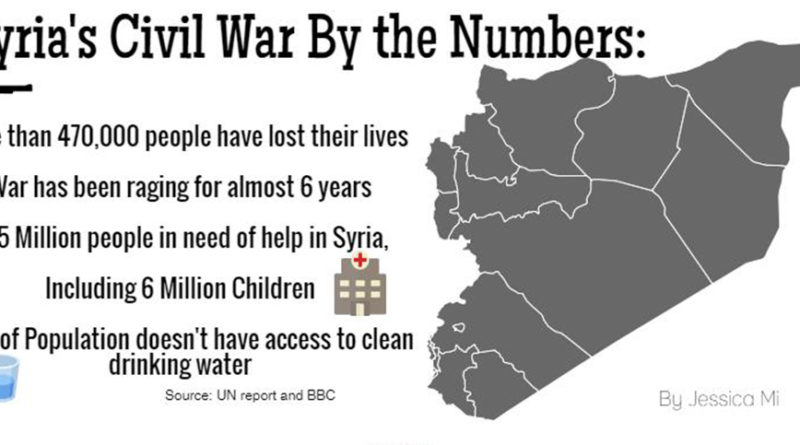 More than 470,000 people have lost their lives as a result of a bloody civil war in Syria that has been raging for almost five years.

The war began in March of 2011, when peaceful demonstrations against President Bashar Al-Assad’s rule quickly escalated after a forceful government crackdown. Protesters began fighting back and by July, the Free Syrian Army was loosely organized and many civilians joined the cause. Syria descended into civil war as rebel groups fought government forces for control of the country. Soon, a terrorist group called Islamic State (IS) joined the conflict; extreme violence has been continuous for over five years.

War conditions for civilians in the country are bleak. According to Mercy Corps, “horrific human rights violations are widespread. Basic necessities like food and medical care are sparse.” The UN has also cited incidences of war crimes such as murder, torture, rape, and enforced disappearances on both sides of the conflict. Assad even used chemical weapons against civilians in August 2013, prompting threats of airstrikes from the Obama administration.

The war is much more complicated than a conflict between rebels and Assad; racial and religious factors also play a part.

“There is no likeminded force on the ground in Syria,” said Max Fisher of Vox News.

Syria is dominated by followers of a denomination of Islam called Sunni, pitched against the president’s Shia Alawite group. The Kurdish people are also fighting to secede from Assad’s rule as part of the conflict.

“There are too many people with too many different agendas all crammed into one part of the world, and they’re all fighting,” said CVHS history teacher Ian Rodriquez.

Iran and Russia support the Syrian government, while the Sunni rebels have gained the support of Turkey, Saudi Arabia, Qatar, Jordan, France, the U.K., and the U.S.

The war has caused a humanitarian crisis. More than 4.5 million people have fled Syria to neighboring countries, and according to the UN, about 13.5 million people are in need of help inside Syria, including 6 million children. BBC reports that about 70 percent of the population doesn’t have access to clean drinking water, one in three people are unable to meet basic food needs, and four out of five people live in poverty.

“We always go ‘never again, never again,’ with the Holocaust and other genocides, yet this is another humanitarian crisis, but it’s a bit more complex due to the turmoil in the area,” Rodriquez commented.

Syrian refugees are in desperate need of help, but President Trump has already drafted an executive order to indefinitely block Syrian refugees from entering the U.S.

Moving forward, it seems this war will not be drawing to a close anytime soon. There have been a few attempts at peace talks, but they have always fallen apart. As Rodriquez explained, “There is no easy solution.”

What people can do in the meantime is raise awareness of the situation and donate to humanitarian organizations to aid to the people of Syria.

The crisis in Syria has already gained some attention on social media due to the massacres in the city of Aleppo a few months ago.

Because social media is a powerful tool that no earlier generation had, it will be essential now to enacting social change by spreading the truth and speaking for those who cannot speak for themselves.