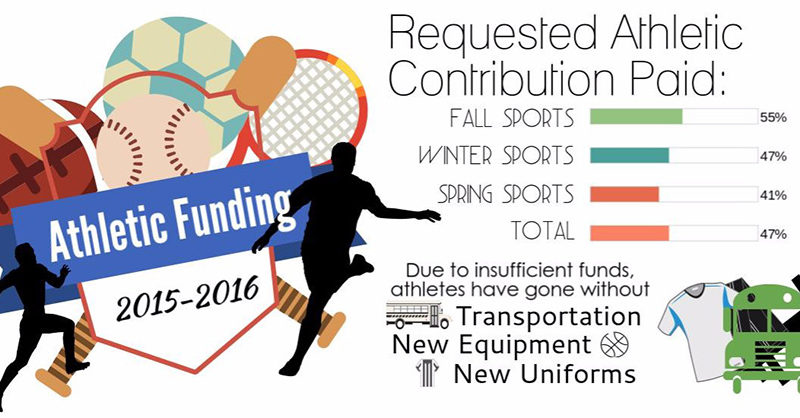 When Trojan athletes sign up for sports teams, what can they expect? Some hope to receive new athletic attire and gear rather than wearing hand-me-downs or old equipment. Others hope for access to adequate facilities. Families expect their athletes will receive excellent coaching and officiating. In addition, students and parents expect safe and reliable transportation.

But the CVHS sports program funding has fallen short for 2015-2016, forcing teams to cut most bus transportation. The main reason? Athletes’ families have given only about 47 percent of the donations the school requests to run the program.

In the fall season, athletes’ families contributed only 55 percent of all money needed to pay for uniforms, gear, officiating, and transportation, according to school accountant Charity Hastings.

In all, CVHS requested $255,050 from athletes’ families and received just $120,567 through participation donations. The entire athletic program costs around $350,000 per year.

Principal Blaine Torpey points out that even though the donations have fallen short of the school’s request, families support the athletic program in other ways, like contributing to the Boosters and to individual teams’ fundraisers.

Still, the CVHS community has not raised enough money to pay all of the costs of sports. The athletic department can only request that families pay or fundraise for their shares, not require it.

Last year 90 percent of the participating families contributed to the sports program.  This year, however, only 45 percent did so.

Thankfully, the district has been able to pay some of the teams’ basic costs. According to Hastings, the district pays the stipends for coaches, which cost around $120,000 this year.

But this spring, swim meets have been cancelled due to lack of funding for transportation. The team has over 100 participants and providing transportation for them has been difficult.

“This causes more stress because it causes more fundraisers which takes time away from team dinners,” said swimmer Peter Althoff.

“We don’t really know how much money is coming in year after year.  The income is never steady,” said Torpey.

Another part of the difficulty is the limited number of district-owned buses. When those are available, teams can use them for about $300, Torpey said.  But private buses cost about $1,000 per day.

When asked if he would cut certain teams to save money, Torpey said, “I don’t think that is an appropriate way to go, and I will advocate to not cut teams. I believe that we can and should come up with a system that allows us to fund the program necessities and fund the basics.”