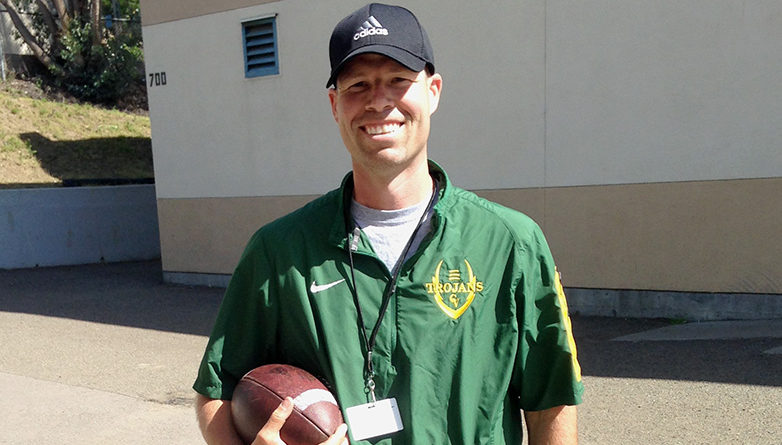 Molzen played football all four years at CVHS, and even got to play college ball for two years at Chabot College.

“Going to school and playing sports (baseball and in particular football) at CVHS helped shape me into the person I am today,” Molzen said. “So when the football job opened up it was a no brainer to apply. Being the head coach of CVHS has been a dream of mine since I graduated.”

Molzen has 12 years of football coaching experience.  He has coached ten years at the varsity level and one year at the junior varsity level, and two years at the freshman level.  Molzen currently teaches physical education in Dublin Unified School District, but has also taught high school social studies for seven years at Hayward and Dublin high schools.

“Right now we are focusing on getting one percent better every day we are together, whether it’s in the weight room, running/conditioning, study hall, or during a chalk/film session,” Molzen said.

Molzen claims that the coaches and players haven’t discussed long term or season goals yet. However, they have started to set standards and expectations.

“It’s kind of like building a foundation to a house. We have to have a sound and strong foundation before you can build walls. The new coaching staff is focused on getting to know and build its relationship with the players,” he said.

“I am beyond excited to be back at CVHS and look forward to build off what Coach McMaster has established over his long tenure as the head coach,” Molzen said.

One thought on “CVHS alum comes back as head football coach”