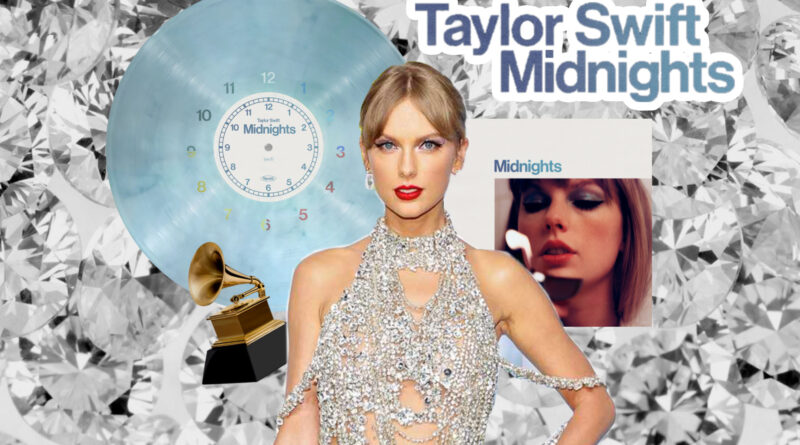 From the color of her clothes to the subtle references to past songs, everything that Taylor Swift posts or releases seems to be carefully calculated; her fans have certainly caught on. Hidden messages or secrets, called easter eggs, are plentiful in Swift’s media. Swifties are on the hunt.

Swift’s latest album, “Midnights,” holds no shortage of encoded messages—neither did the release process. Swift announced the new album at this year’s MTV Music Video Awards, donning a dress of Swarovski jewels reminiscent of the dress she wore 13 years ago, when Kanye West infamously interrupted her acceptance speech at the same awards ceremony in 2009. But now, instead of being embarrassed, Swift is empowered.

As Swift’s tenth studio album, “Midnights” captures the highs and lows of a sleepless night. Described by Swift, the songs are “a journey through terrors and sweet dreams.” Here, the most quiet and intimate part of her day is amplified to share with the world.

With “Midnights,” Swift leaves the indie-folk genre of her previous two releases, “Folklore” and “Evermore,” to return to the catchy pop that solidified her as a household name. Released on Oct. 21, the concept album experiments with electronica and synth-pop, creating a dream-like aura. Consisting of 13 songs and 10 bonus tracks (including both “3 a.m.” and “Lavender Edition”), “Midnights” is deeply personal and reminiscent. Swift’s masterful lyricism paints her experiences vividly, while allowing listeners to relate to their own lives.

Swift’s voice is as polished and robust as ever: she transitions between chest and head voice with ease. Longtime collaborator Jack Antonoff’s production is punchy yet somewhat restrained, allowing for Swift’s artistry and lyrics to shine through.

The album’s lead single, “Anti-Hero,” deals with the relatable issues of self-antagonization and loathing. Containing some of Swift’s odd yet poignant lyrics—Swift is the protagonist of her story, but in reality she’s malevolent. “Sometimes I feel like everybody is a sexy baby / And I’m a monster on the hill / Too big to hang out / Slowly lurching on your favorite city / Pierced through the heart but never killed,” sings Swift. Always the advocate for English teachers: Swift utilizes various rhetorical devices, giving a deeper meaning to her music than what’s on the surface. “It must be exhausting always rooting for the antihero.”

“Bejeweled” is an upbeat, empowering song backed by glittering twinkles. Here, Swift is undervalued by her lover; she goes out for the night knowing that she can still dazzle others. She sings “familiarity breeds contempt” as a clever turn of phrase to the common saying, “kindness makes the heart grow fonder.” Swift is strong and defiant, focusing less on the criticism of others, and more on herself. “Best believe I’m still bejeweled / When I walk in the room / I can still make the whole place shimmer.” And shimmer she did. For the first time ever, during the week of Nov. 5, no spots in the top 10 of the Billboard Hot 100 were held by a male. Why? Because Swift held them all.

In the music video for “Bejeweled,” Swift is accompanied by a star-studded cast, including Antonoff, Laura Dern, HAIM, and Dita von Teese. With diamonds and jewels galore, the video recalls the dress Swift wore at the album announcement. Classical instrumentals of Swift’s older songs play during the intro and outro. Imagery and hidden details all hint one thing: a new album, the rerecorded “Speak Now (Taylor’s Version).”

To conclude “Midnights,” Swift slyly sings: “It was all by design / Cause I’m a mastermind.”