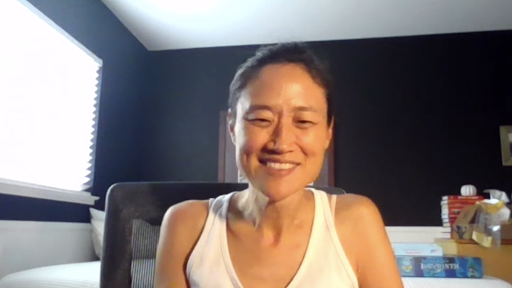 It’s 10 a.m. on a weekday morning, and with the touch of a radio dial, Mina Kim’s voice fills the air. As co-host of radio station KQED’s live talk-show, “Forum,” Kim reaches millions around the Bay Area and state of California.

Kim might seem a born natural, but her path to radio journalism was not a clear-cut one. After college, she did Teach for America and became a first-grade teacher, although she knew at this point that she ultimately wanted to pursue a career that contributed social change to the world. She did not realize journalism was her true calling, however, until she gained the opportunity to shadow a journalist and editor through Coro, a public policy fellowship program.

Through that experience, Kim recognized the value journalism has in educating the community.

“I thought, that’s so cool that you are out there gathering information, relaying it back to the people in hopes of better informing the public about what the issues are,” she said.

Soon after, Kim took an internship at KQED with the experimental program, “Pacific Time,” which focused on Asian and Asian-American issues. She became an award-winning news reporter, which allowed her to directly witness stories and interview people at the scene. In this way, Kim likens journalists, who “write the first page in history,” to first responders.

Kim’s own responses to intense stories while serving as a news reporter have had a profound impact on her. For instance, she vividly remembers her experience covering the protests following the killing of Oscar Grant in Oakland: “This was when the verdict was announced for the cop who had shot him. And I remember watching people crumble… on the sidewalk at the news. And being a witness to that is really powerful and really humbling.”

Starting in 2014, Kim became the Friday host of KQED’s program, “Forum,” while the show’s main host of over two decades, Michael Krasny, hosted the other four weekdays. Six years later, Kim took over the daily 10 a.m. segment of “Forum,” a position she continues to hold to this day.

Along the way, Kim has appreciated how race intersects with a journalist’s craft. Hailing from St. John’s, Newfoundland, Kim identifies as Korean Canadian-American, an identity she sees as intertwined with her skills. She explained that her ability to truly empathize with people of different races comes from having shared similar experiences as a non-white person: “So that is in a way a superpower…. the kinds of things that you experienced as a result of your race are part of your skillset.”

Like many other AAPI people, however, Kim is no stranger to having this “superpower” marginalized and disregarded. She reports that journalists have many opportunities to find out whether the “gatekeepers of editorial decision-making” truly value them for their individual perspective, skills, and talents, or the mere “diversity points” they bring to the table. For example, if an AAPI news anchor received a script that “alienated and otherized and uncentered” people and wished to use their personal experiences to edit it to be more respectful and representative, an editor that expressed indifference or refused would prove that they cared more about the anchor’s race than their insights.

Kim adds that before diversity became a recent focal point, there existed the “journalistic ideal” of a “view from nowhere,” wherein journalists were expected to suppress their experiences and identities, all in the name of impartial reporting. In reality, however, it is impossible to have a “view from nowhere,” and embracing diversity is critical to true, honest journalism.

“[Diversity] is deeply, deeply important [to journalism]. It is actually essential to accurate reporting. Because if you are constantly reporting from the lens of a relatively singular experience, then you are only ever going to get that portion of the picture. But… [people] bring insight and empathy because of whatever experiences they have had,” Kim said.

The journalism industry has been taking recent steps to diversify and accept divergent perspectives, though it still has a long way to go—52% of nearly 12,000 journalists surveyed reported a lack of racial and ethnic diversity in their news organizations—and Kim recognizes that this movement is occurring faster in some places than others.

The depth that “Forum” brings to these topics is purposeful, especially as American society has undergone rapid political polarization over the past few years. In an era where traditional news sources are being replaced by social media, and the line between fact and fiction to many are blurred, hosting a show that informs the public about current issues comes with challenges. While Kim acknowledges this, she also details how “Forum” has embraced this polarization as an opportunity to more easily crystallize “what matters, and our willingness to articulate what as a journalism organization at KQED, and what as a show, we should do.”

Identifying what matters to “Forum” has yielded two core areas of focus. Firstly, the show must prioritize “stories that help strengthen democracy by giving people good information.” Kim explained that this is because KQED, as a journalistic organization “whose function is to inform people to be able to make good decisions [and] vote in an informed way,” is “very much an entity that is essential to a functioning democracy.”

Secondly, Kim described how “Forum” has been deliberately centering the affected populations of each story or issue they examine. “We’re going to lean into the humanity and that’s going to be our area of focus,” she said.

Keeping these core foci in mind while hosting an engaging show might seem like a difficult task to accomplish every day, but to Kim, it is “both the beauty and the challenge” of live radio.

“Definitely I’ve had moments where I’m like ‘Oh, I shouldn’t have said that,’” Kim admitted, laughing. Or, “‘I don’t know why I’m saying this.’ But that happens. Sometimes that’s not a very polished process when you’re doing it in the public in the moment. But I think people who like tuning into a live show value hearing people think and process in real time.”

Exploring and learning from the challenges of radio journalism has not always been smooth sailing. Early on in Kim’s career, she remembers having to work through feelings of impostor syndrome, until she realized that people were tuning in to listen to her because they genuinely valued her interviewing intuitions.

Her biggest tips now for aspiring journalists and interviewers are thus to simply listen to the people you are interviewing and trust your instincts.

“Don’t try to be everything to everybody,” she urged. “Trust that what is interesting to you matters and is important and will be important to other people as well.”