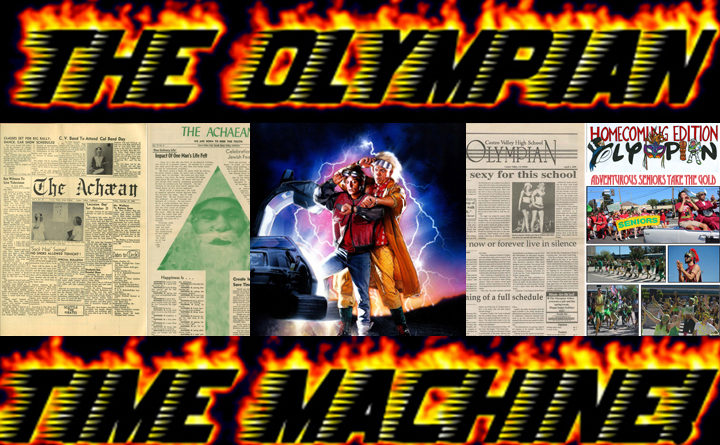 Excerpts from The Olympian archives show the way things were at CVHS.

Oct. 2, 1959: “A rough boy from the wrong part of town went to race a nice boy from the right part of town. The race was considered a flop because the nice boy won. The rough boy went home and had fits because he lost. He then challenged the nice boy. They took off and ended in a tie. The two boys shook hands and were friends from then on.”

Seems like rough boy and nice boy were never different from the start.

Oct. 23, 1970: “American classes are more casual than in Iran, according to 17-year old Nasser Sarioghalam from Teheran, Iran, who is attending classes at CVHS… Nasser stated that he hasn’t gotten used to American food yet, but he hopes to make the change from Iranian food soon.”

Cultural divides were much more apparent in the 1970s, in which a story simply about an Iranian boy at an American school was written.

What could Gavin’s type be now?

Jan. 20, 1989: “We have read about students who were suspended at Bancroft Junior High for threatening a student because of the color of his skin. The Aryan supremacists organized a concert in Napa County to promote racism… And even closer to home, at the Hayward Library there was a planned white supremacy meeting in honor of Hitler’s birthday.”

Oct. 15, 1999: “Getting alcohol from where parents keep it in the house seems to be a popular method. In a survey, 11 out of 29 students said they got drinks from the cabinet where their parents kept it. When parents leave, kids raid the liquor cabinet and drink as much as they want, and they never have to leave their own house or deal with people behind the counter at stores.”

Nov. 20, 2009: “A 17-year old senior girl said a man attacked her as she walked to CVHS near San Miguel and Lux on Oct. 27. He came at her from the side and touched her below the waist, she said. She escaped unharmed and ran to the school, where she notified campus security, which then notified the sheriff’s department.”

Do not worry, the man was indeed arrested soon after his attack.