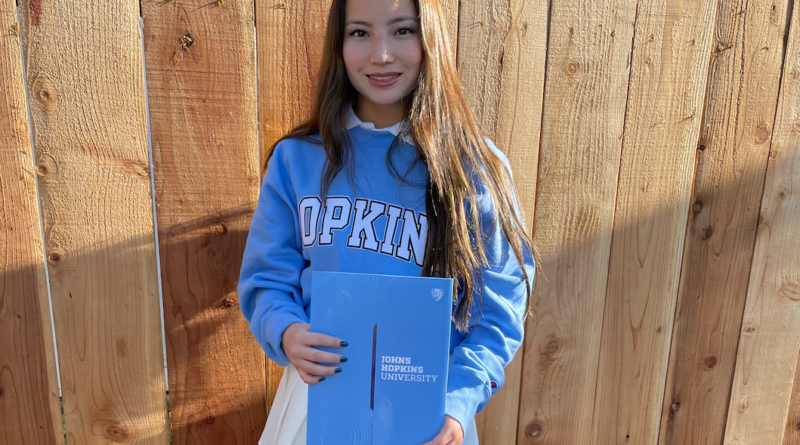 Usually when applying for colleges and universities, students would pick several of their top choices and hope for the best.

Senior Jennifer Tang, however, stands out from her peers. She has had her sights on one school for a while, choosing to become an early decision applicant at Johns Hopkins University. Now, she has been accepted and will be attending the school this fall.

Tang’s status as an early decision applicant is a binding agreement in which she joins the applicant pool earlier than the majority. She will be required to attend Johns Hopkins and would not be able to change her decision as per the agreement.

Tang is particularly interested in Johns Hopkins for its research program, preparing for a major in neuroscience.

“They also offer a plan for medical school, which is what I’m doing after undergraduate,” said Tang.

As Johns Hopkins is an elite school with a low acceptance rate and requiring students at the top of their graduating class, Tang has certainly been an excelling student. Even more so, she has had an interview with Harvard University’s Admission office and received acceptance letters from California State University and UC campuses.

Beyond academics, Tang does various extracurricular activities. Some of Tang’s activities include volunteering for a church youth group on a weekly basis, helping an orthodontist as a translator for Spanish-speaking patients, and performing monthly in the church’s band.

Despite her best efforts to keep on track of her academics and college preparations, the pandemic has taken its toll on her like many others. Tang has felt lost at times when writing her application essays, but the guidance from teachers and the College and Career Center helped her through the difficulty.

Tang has turned the pandemic into an era to reflect on in her future.

“Later on we will get to learn from this experience,” said Tang optimistically.