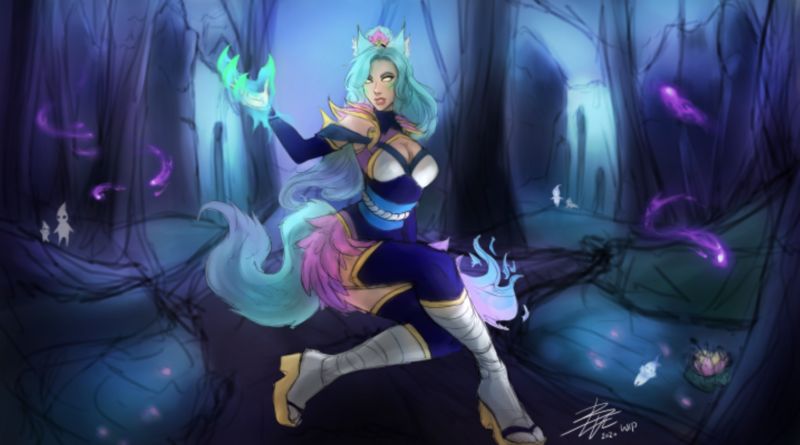 Over 45 percent of businesses fail within the first five years, but sophomore Eryn West, who goes by the online persona of Blue, has been breaking this trend by succeeding and thriving selling her artwork online to customers.

A professional artist and Twitch affiliate, West sells her artwork online by promoting her work on sites such as Twitter, Twitch and Discord. As of now she has over 300 followers on Twitter and that number is only growing.

What separates West from other artists is that she is only 15 and is already taking commissions.  Doing all of this with her daunting class schedule while independently studying Art Studies, where she learns concepts such as Color Theory, is a path that not many are willing to take.

West makes money by taking commissions from people who ask her to draw art for them, from desktop wallpapers to posters she can create anything and everything that comes her way. “I usually have people pay me around $95, and it takes me around three hours to make a drawing,” affirmed West.

West usually draws copies of famous video game icons from games such as Overwatch and Mario and puts a unique spin on their character design. Some creative twists that she has brought to life include zombie slayer Mario, cyborg Princess Peach and a goth version of Mercy.

Her specialty is making emoticons for platforms such as Twitch. Streamers pay her to create special and unique badges and they are delighted with the results, with glowing recommendations from customers.

During the pandemic West says that her online business has only grown. “I have a lot more time to draw now, and more people are starting to ask me to make drawings but I don’t like to take too many commissions. I don’t like to overwork myself,” confirmed Blue.

With this new found time West has also started entering more drawing events in the community where she participates in friendly programs such as “art swaps” where she draws the avatars of other people’s online avatars in her unique artstyle.

When she is not doing commissions or art West likes to play a video-game called Osu. A game that tests your reflexes and hand-eye coordination. “It is really fun, It keeps my hands steady and I am really good at it!” said West.

In the future West hopes to be able to grow her freelance work and work her way up to working for other entities such as small indie game companies or maybe even Pixar, she believes that with her skills that she will be able to draw anything that comes her way!

West hopes to one day be someone influential in the drawing community and for good reason too. With her colorful artstyle and vivid imagination, West is someone that you should be looking out for in the drawing scene. With her skills and dedication she may very well be responsible for making this generation’s Mona Lisa!