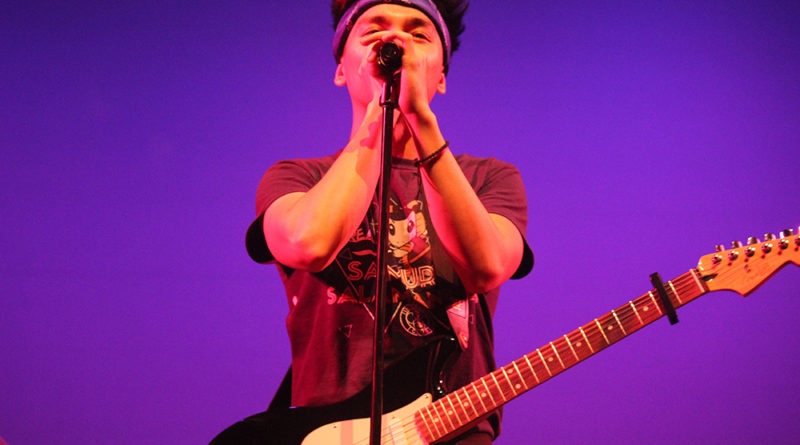 One of the many singers during the show that had people humming along and dancing.
Feature Slider
March 20, 2019March 20, 2019 Katy Siler charity talent, clubs, community, CVHS, Fundraising, interact

In a buzzing theater filled with CVHS’ most spirited kids, one took the stage to play an acoustic version of a popular song. Within 20 seconds, every phone in the theater had its flashlight turned on and was being waved in the air. Interact Club hosted a benefit show entitled “We’re All in this 2gether.”

“I think the night went really well, it was a really great time for me. We ended up raising $4,000, and all of that’s going to our international and community projects. I really really enjoyed it and I’m really happy about it,” said junior and emcee of the evening Anmol Gill.

Towards the end of the show, several club members presented their international and community projects. The money raised will go to aiding youth in Venezuela affected by the economic crisis and youth in our local community in need of glasses.

The event was not solely organized by Interact Club. It was put on in collaboration by multiple schools in Hayward, San Leandro, and Castro Valley. The event took place at the San Leandro Arts Education Center.

The night was filled with many exceptional acts. Many people sang acoustic versions of pop songs or danced to K-pop music. Bay Area band “The Side Project” closed out the night, bringing people to their feet to come dance in front of the stage.

“It went really well. I met a lot of people there, and it was a really fun experience,” said senior Evan Sim. Sim entranced the audience with an acoustic version of Rex Orange County’s “Loving is Easy.”

In addition to performances, the show also featured raffle baskets, a kahoot with over 400 players, and a “High School Musical” sing along.

Senior Ria Panjwani was took the lead in organizing the spectacular evening. Panjwani was thanked for her efforts at the end of her show with a bouquet of flowers.

Interact Club members made up a energetic audience. The crowd was screaming after every performance, sometimes even during performances.

The event was an amazing combination of charity and talent, and provided for a stunning show.