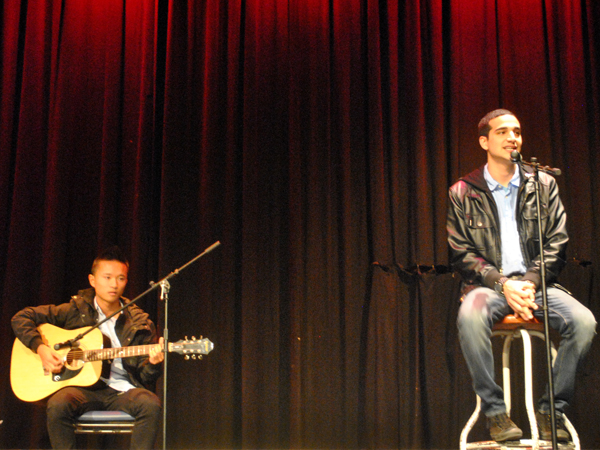 The CVHS Photography for a Cause club celebrated its success with its sold out benefit show.

The show was held in the school cafeteria on the evening of Nov. 30 with doors opening at 5:30 pm. Many anxious and eager students, parents, and teachers couldn’t wait to get inside the cafeteria.

“I was really, really surprised because not a lot of school events get this many people, and I just loved the outcome the vibe of the crowd and all the other performers. It was a really positive scene,” said senior Joy Johnson, who performed with her band Kryptonite.

There were many acts including Pallen M2, The Next Step, When the Night Met Day, Johnny Maxwell, Kalin and Myles, and Geraldine Sotto. The show had performances ranging from dancing to singing to martial arts. Each act had something interesting and entertaining for the audience to enjoy.

“I liked the diversity of the performances,” said junior Evan Ma.

A new eruption of excitement and applause came with each performance. The crowd couldn’t wait to see what was coming next.

“I thought it was amazing. I really didn’t think it was going to be as big as it was to be honest, but I had a great time,” said sophomore Alyssa Roque-Rodarte.

Performers were invited and informed about the show through the event page on Facebook. Friends and students received the Facebook invite, resulting in the massive outcome that night.

“It was one of the best school performances I have seen.  It was very professional,” said sophomore George Eliopoulos.

With the show raising over $1,500 dollars, many asked about the possibility of the same event happening next year. The audience members and even performers confirmed their willingness to attend another show because of the night’s positive outcome.

The entertaining night left everyone amazed. The show was the club’s chance to simultaneously raise funds for an important cause while also bringing awareness to the hidden talent around the Bay Area, and it proved to be a success.