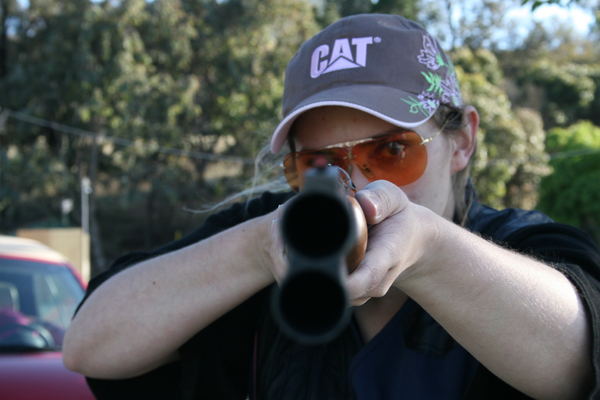 Junior Kathryn Weese brought home four gold medals for a dual skeet competition on April 9.  Weese has been shooting international skeet, a competitive shotgun sport shot in the Olympics, for about three years. Weese’s journey to success began in sixth grade, the first time she picked up a gun.

“Skeet is shot at a series of stations placed around a semi-circle, with certain shots taken at each station from two houses,” informed Weese. “Skeet was originally practiced by hunters in their off season, because it mirrors the flight of a bird; it became an Olympic sport in 1968.”

“It was challenging because I had not been able to get a lot of practice in between school and AP Testing, but it is always fun because I get to see all of my shooting friends, people I have known since my first year of shooting competitively,” said Weese.

“School is okay, as long as it doesn’t mess with shooting,” coach Gary Weese joked. “We’re actually looking forward to going to Colorado Springs for Nationals.”

Weese has also received many medals and awards in the past years. In 2009, Weese recieved a gold medal in State Junior Olympics. That same year, she participated in the USA Shooting Nationals.  In 2010, she was awarded with a silver medal for State Junior Olympics, a gold medal for Junior Division Category at SCTP, and first place in State Shoot for her category.  Weese has also shot locally for International Skeet and American Trap and practices with the CYSSA (California Youth Sport Shooting Association) Martinez team for American Trap.

In her free time, Weese serves as an NRA Junior Trainer, where she teaches people how to shoot safely and properly.

“No animals were harmed in making of all this fun,” laughed Gary Weese.