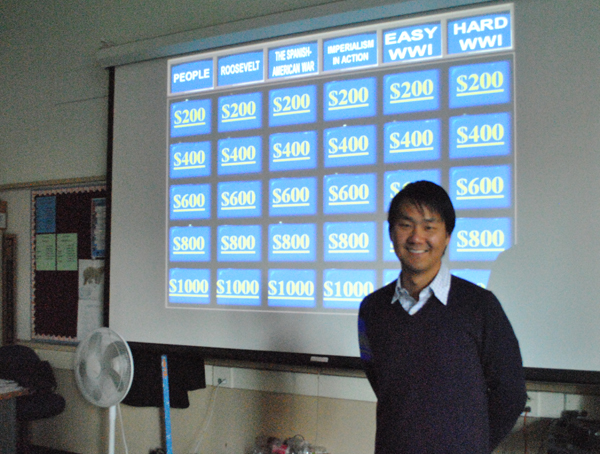 If you missed Roger Kim’s appearance on Jeopardy Feb. 4, you missed the most action-packed and phenomenal game show there’s ever been. Our very own government and US history teacher defeated all his opponents in an epic showdown on national television.

Kim played a smooth, safe game. He didn’t take wild guesses or hit the button without thinking. For the most part, each question he responded to was right. He tended to answer the ones nobody else seemed to know, and luckily, these were the big 1,000 and 2,000-point questions. Two of his correct “questions” were “What is detention?” and “What is Thailand?”

To be honest, things started poorly for Kim in the first round. Either he didn’t know the answers or didn’t push the button in time. His opponent Fred Cofone started by sweeping a set of questions on golf.

“It was really challenging to hit the button before everyone else. I knew a lot of the questions in the game, and I was trying my best on the buzzer, but unfortunately I wasn’t fast enough,” said Kim.

By the end of the second round, Kim had $10,400 while Cofone had $17,000. Both of them wagered lots of their money on Final Jeopardy with the category of “British businesses.” The answer was: “For decades, Rolls-Royce also owned this luxury brand named for its founder; now both are produced by German companies.”

“I didn’t expect to get the question right because I don’t like talking about British stuff, so yeah I was surprised that I immediately knew the answer in Final Jeopardy,” said Kim.

It was clear that Kim played a smart game. He may not have started out with a bang, but he ended with pizzazz.

Because he won on the first day, Kim was able to compete on a second episode. Unfortunately, Kim’s second appearance on the show on Monday, Feb.7 was to be his last. He missed a Daily Double question about 16th century British politics and ultimately didn’t steal the win.

“I’d like to personally thank all the teachers and students for supporting me. It’s nice to know people watched Jeopardy for me and I appreciate everyone’s consideration,” Kim said.