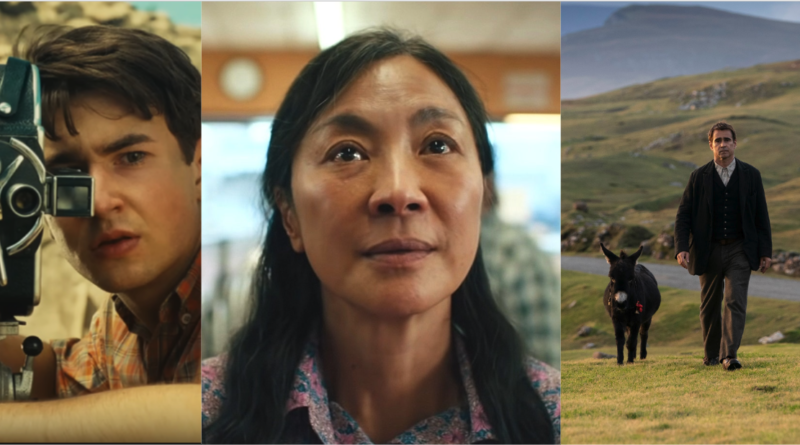 Awards season, which officially kicked off on Tuesday, Jan. 10 with the 80th annual Golden Globe Awards and continued on Sunday, Jan. 15 with the Critics Choice Awards, has established the top three contenders for Best Picture at the Academy Awards: the critical darling, “The Banshees of Inisherin,” the Steven Spielberg drama, “The Fabelmans,” and the surprise fan-favorite, “Everything Everywhere All At Once.”

With all three films earning best picture prizes at the two awards shows, respectively, Oscar-predicting-pundits must now rely on the newly-released nominations for the SAG Awards and British Academy Film Awards (BAFTA). With the Academy Award nominations set for Tuesday, Jan. 24, let’s examine the cases for each of these films:

“Everything Everywhere All At Once”

With a March 11 release date and a sci-fi, action-heavy story that the Academy typically does not go for, the fact that “Everything Everywhere All At Once” has become a frontrunner to win Best Picture is somewhat of a miracle.

The miracle film, which is written and directed by Daniel Kwan and Daniel Scheinert (collaboratively known as Daniels), follows a mother’s journey through the multiverse, as she experiences the results of her actions throughout her life.

Twenty-eight different awards bodies have recognized “Everything Everywhere” as the Best Picture of the year, making it seem like the runaway favorite for Best Picture. For perspective, “The Banshees of Inisherin” has the second most Best Picture precursor wins at only 10.

The Daniels would also seem to be running away with Best Director (31 precursor wins), as would former child star Ke Huy Quan in Best Supporting Actor (43 precursor wins). Only one of these races, however, seems to be locked.

So with all this success, what’s working against “Everything Everywhere All At Once?”

Well, the film didn’t have the best performance at the Golden Globes. While stars Michelle Yeoh and Quan won the awards for Best Actress in a Motion Picture – Musical/Comedy and Best Supporting Actor, respectively, “Everything Everywhere” lost all four of its other nominations: Best Motion Picture – Musical/Comedy, Best Director, Best Screenplay, and Best Supporting Actress for Jamie Lee Curtis. Three of those awards went to the latter two films in this article.

In addition, the largest obstacle in the way of “Everything Everywhere” nabbing the Best Picture prize at the Oscars are none other than the Oscar voters themselves. Throughout the 94 years of its history, the Academy has been notoriously conservative in its Best Picture selections. From “The King’s Speech” beating “The Social Network” and “Inception,” to “Green Book” beating “BlacKkKlansman’ and “Roma.” The recent wins of “Parasite” and “Nomadland” seem to suggest that the Academy is taking a turn towards more innovative cinema, an umbrella that many claim “Everything Everywhere All At Once” certainly falls under.

However, though films such as “Avatar” and the original “Star Wars” have come close, no science fiction film has ever won Best Picture. While doubts that the Academy may not take the film seriously because of this looming stat, 2023 may just be the perfect year for “Everything Everywhere All At Once.”

“The Banshees of Inisherin”

Let’s take a look at the film that has the second most precursor prizes next, which unlike “Everything Everywhere” has a story that some may deem as more “Oscar-friendly.”

“Banshees” follows two close friends at a crossroads when one of those friends decides to unexpectedly end their relationship.

“Banshees” train of momentum was immediately halted just a few days after the Golden Globes; halted, oddly enough, by the same group of people that have supported them all year: the critics.

The good news? As hinted at earlier, “The Banshees of Inisherin” has a story at its core that is much easier for Oscar voters to swallow in comparison to “Everything Everywhere All At Once.” But perhaps another film would be an even more appealing story for Oscar voters.

Steven Spielberg is often hailed as the greatest filmmaker of all time. From action films like “Jaws” and “Raiders of the Lost Ark” to emotional dramas like “E.T. the Extra-Terrestrial” and “Close Encounters of the Third Kind,” the man has mastered the emotional arc of nearly every genre.

And yet, despite widespread critical and audience acclaim, Spielberg only has three Oscars: two for his directorial and producing contributions to “Schindler’s List,” and one for his direction for the World War II epic, “Saving Private Ryan.” Spielberg was honored with these awards in 1994 and 1999, nearly 30 and 25 years ago, respectively. So is 2023 the perfect time to award him for a fourth time?

Not only is the narrative to award Spielberg appealing, but to award a movie that he co-wrote (with Tony Kushner) about his own childhood adds to this narrative.

“The Fabelmans” is a semi-autobiographical account of Spielberg’s childhood experiences. It follows a teenage Spielberg, here named Sammy Fabelman, navigating his love for filmmaking while also growing up in a household that is split between valuing artistic endeavors and scientific principles. A shocking family secret complicates this conflict.

While “The Fabelmans” has only won two Best Picture precursor prizes, one of these prizes was the Golden Globe for Best Motion Picture – Drama. In addition, Spielberg also won Best Director at the Globes.

So with an acclaimed director at the helm, a personal story about his own childhood at the center, and a major win at one of the top awards precursors, it would seem like “The Fabelmans” would be an easy lock for a Best Picture win. Right? Other recent awards precursors, however, have indicated otherwise.

Like “The Banshees of Inisherin,” “The Fabelmans” did not do well at the Critics Choice Awards, only taking home one prize: Best Young Actor for newcomer Gabriel LaBelle. The film’s week only worsened when the BAFTAs only gave “Fabelmans” a nomination for Best Original Screenplay and nothing else.