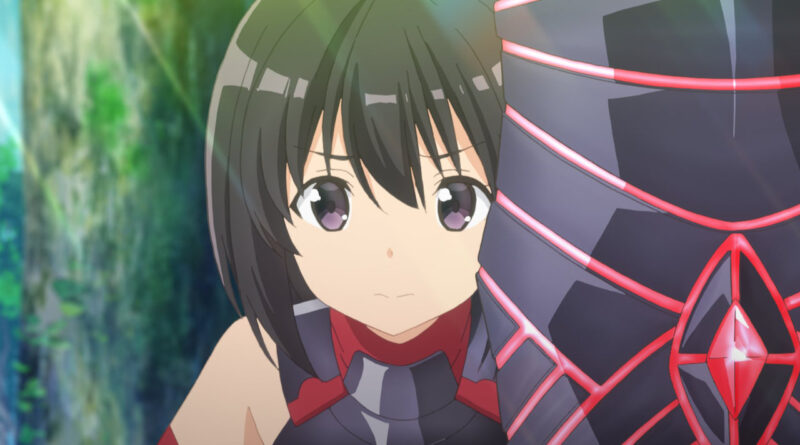 Maple and her guild, Maple Tree, battle against the Order of the Holy Sword, containing some of the top players. She duels Payne, the highest ranked player in the entire game. The rest of Maple Tree fend off Payne’s guildmates, anxiously watching the clash between the strongest shielder and the strongest swordsman.

Maple switches off her angel form to reinforce her defense, but Payne does not give her a chance to teleport to her allies, isolating her. Payne’s guildmates boost his strength and speed, catching Maple by surprise. He lands a devastating hit on her, but has Maple been defeated, or does she have another skill up her sleeve?

Released in winter 2020, “Bofuri: I Don’t Want to Get Hurt So I’ll Max Out My Defense” is a 12-episode anime series in which Kaede (Maple) is convinced by her friend Risa (Sally) to play a VRMMO game called New World Online.

Although Kaede has never played video games, she decides to give it a shot. She chooses her in-game name as “Maple” and puts all her status points into vitality to avoid getting hurt.

The plot mostly revolves around Maple wackily becoming an overpowered shielder. She defeated her first boss by eating a poison dragon and gaining her main gear and skills as a reward. Later during her first event, a battle royale, she effortlessly wins third place while still a newbie, prompting developers to nerf her.

“She’s becoming more of a last boss than the last boss itself,” noted one developer after watching Maple poison an entire sea to beat a supposedly undefeatable boss.

I thought the anime was lighthearted and comedic, as Maple was an airhead who just wanted to have fun. Much of the music created the feeling of a new world, but was respectably epic during the fight scenes.

My favorite parts were definitely when Maple’s victims realized who she was and panicked. I really enjoyed Maple’s cheerful attitude and her unconventional playing style. Who else would make their pet turtle giant, flying, and able to fire lasers?

In addition to her duel against Payne, I also found Maple’s battle against the Flame Emperors, the second-place guild, amazing.

Although it did not get the recognition it deserved, I enjoyed “Bofuri: I Don’t Want to Get Hurt So I’ll Max Out My Defense.” In addition, a second season has been announced with a tentative release date, in which the silhouette of Maple’s shield doubles during the last episode.

During a celebration of the three guilds, Sally points out Maple’s unpredictability. “I’m just playing the game normally, you know,” responds Maple. “As if!” exclaim all three guilds.