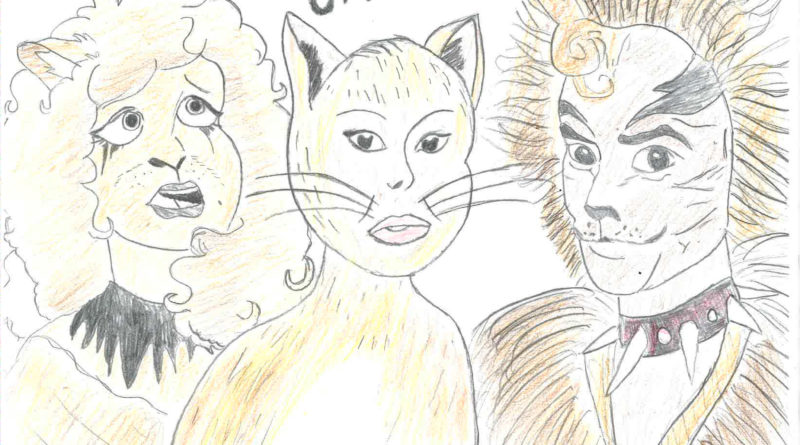 A young cat named Victoria is abandoned by her owners and thrown into a dumpster in a city. She meets a group of cats who call themselves “Jellicle Cats” and they introduce her to the unique traditions of being a Jellicle Cat, including the Jellicle Ball where once a year they compete under the Jellicle Moon to be chosen for rebirth on the Heaviside Layer to become the cat they had always dreamt of being.

“Cats” came out in theaters on Dec. 20. The movie is based on the popular musical of the same name, which has been on Broadway since 1980. The movie is very similar to the musical with the addition of CGI (computer-generated imagery).

The movie seemed very frightening at first due to the very detailed and realistic CGI used to picture the cats. The characteristics of being a cat were also exaggerated by the actors through hissing and dancing. The idea of watching a two hour movie featuring cat-like humans was weird to get used to.

The story itself is quite unique in that it alludes to the myth that cats have nine lives. But through the repetitive singing in dancing, which the movie almost entirely consisted of, the plot was unclear. It took me some research to understand what the movie was really about and even after I was unable to understand what a Jellicle Cat really was.

There were several famous stars in the movie, including singers: Jennifer Hudson, Taylor Swift and Jason Derulo, and comedians Rebel Wilson and James Corden, who all represented Jellicle Cats competing in the Jellicle Ball. The talented cast had beautiful voices, especially Hudson who sang the musical’s most famous song, “Memory.” Corden and Wilson were also very funny and their humor made the movie a bit more enjoyable.

Although I found the movie funny at some times, I found the CGI unappealing and I believe it easily made many people uncomfortable. The plot is unique, but with such detail in visual effects and music, it’s too distracting for the plot to be clear.