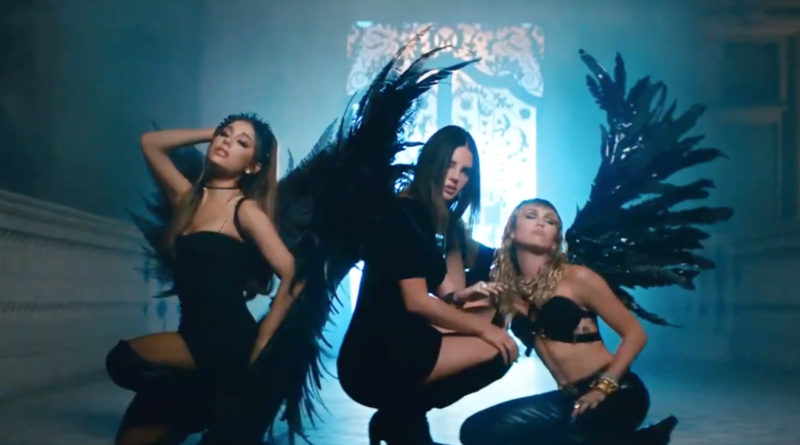 A steady beat fills the air as the sound of footsteps joins in. Shots of the artists walking around mysteriously appear before all the sound ceases. The screen fills with gold lettering, and a more pronounced beat picks up. Finally, a shot of all three artists appear, wearing skin tight black outfits with matching angel wings just before the first lyrics ring out: “Boy, don’t call me angel.”

The song and music video, “Don’t Call Me Angel (Charlie’s Angels),” premiered on Sept. 13 featuring three distinct artists: Ariana Grande, Miley Cyrus, and Lana Del Rey. The single is made for the soundtrack of the movie, “Charlie’s Angels” (2019). Within two weeks, the song had debuted at 13 on the Billboard’s Hot 100. It was first teased to fans on Sept. 9 and 10 when the artists released photos of the title and a short teaser of themselves walking down a foyer with angel wings on their social media accounts.

The song has an especially catchy beat and easy to learn lyrics that match the title perfectly. The song also does an amazing job at blending all three singers, who have distinct, unique, and different voices and genres of music. Grande and Cyrus take the lead in the song, starting with the catchy chorus. Del Rey comes in at the bridge of the song, where the tune and beat change, and finishes it out with Cyrus and Grande.

The video features the three singers as fierce, independent women, fitting the song’s lyrics. Grande is seen in all white with matching angel wings in an open mansion, while Cyrus is seen getting down and dirty in a boxer’s ring. Del Rey is shown in a gold chamber wearing a red robe and in a poorly lit room wearing an all black outfit.

All three artists join up in their own black outfits and angel wings to strut down a foyer and eat from a feast in a dining hall. At the end of the video, Elizabeth Banks walks into the dining hall to gather the three “angels” who need to go to work.

I enjoyed everything about “Don’t Call Me Angel (Charlie’s Angels).” I was skeptical at first when I saw that it was a collaboration by Grande, Cyrus, and Del Rey, who all have distinctly different voices, but the blend between the three singers was done beautifully. The music video was also entertaining with its narrative of the three artists as Charlie’s Angels.

From the beat to the lyrics, the song is bound to get stuck in your head.