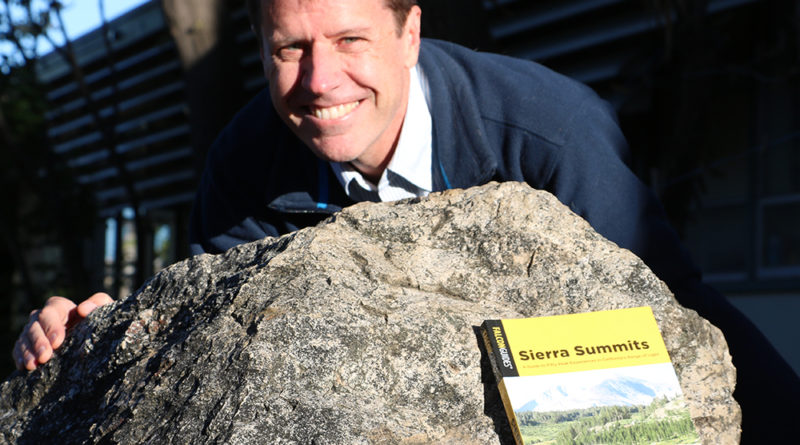 Matt Johanson grew up in the Bay Area but moved near Yosemite to work for The Union Democrat newspaper after college. He has hiked, climbed, and skied the Sierra Nevada his whole life as part of his family tradition. Currently, Johanson writes about the outdoors for various publications and teaches social studies and journalism at CVHS.

Have you always been eager to climb?

When did you get the idea to write the book?

I worked at that job for about three years and then I went back to college, got a credential, and became a teacher. I knew when I did that I wanted to keep writing because I enjoyed it so much, but I also knew that I would have plenty of work as a teacher. So I made myself a deal; I was going to keep on writing but only projects that I thought I would enjoy. I was never going to take anything just to have a job or just to make money.

Oh, so this isn’t your first book?

No, it’s my fifth and I would say it is my favorite. I hope I am getting better at these as I go along. Some of the new things that I did with Sierra Summits are that I have a little history for each of the different mountains and I tried to also focus on trips that the most people would like to do.

I heard that you took all of these photos by yourself, is that true?

I took all of them except for just a few family photos from my dad. But, I think there’s about 150 photos in there and I probably took 145 of them. This is based on trips that I’ve been taking for the past 25 years, especially the last two or three years.

To me it seems like you conquered all of the mountains I can ever imagine, but are there any other mountains that you are planning to climb in the future?

There are a lot that I want to do in the Sierra that I haven’t done yet. There are 15 mountains in California that are at least 14,000 feet high, they’re called Fourteeners. I’ve done only five of them so I have ten left to go. So, I have plenty of work left to do.

Are you currently working on another book that you would like to tell us about?

Just this week I worked out the agreement with Falcon to do another book similar to this but not just the Sierra. It’s going to be all of California. There will be 50 favorite summits in California, including the north like Mount Shasta, my favorites in the Sierra, some Bay Area peaks like Mount Diablo and Mount Tamalpais, and then I’m also going to do some in Southern California. That was actually what I did on my spring break. I took a road trip to Southern California and I did ten new mountains that I’ve never done before. I’ll be ready to put it in the next book!

After writing and assembling the book, what are some of the things you learned?

I think people really enjoy getting out and doing new things. And so I learned through the last two books that readers will appreciate it if you give them trips that they can do, not just really hard ones that they’re never going to do. So, I really tried with Sierra Summits to make it reader friendly in that way.

Anything you would like to say to your parents who taught you to how to interact with nature from a young age?

My dad and my mom gave me everything I could ask for, great upbringing and education and lots of love so I’d say, “Thanks!”