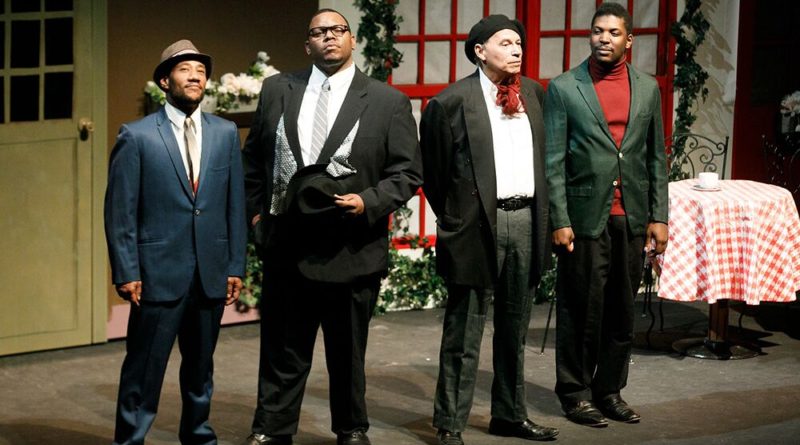 “What is wrong with America?” Fatima asked Chester innocently at the French cafe.

Chester chuckled. “Where do I start?” he replied.

Chester explained to his girlfriend Fatima that as a black man in America, he lived his life “constantly having to prove” that he was not a “threat.” Although many countries have this view of America as being “the land of the free,” a closer look at how America treats the African American population can show a stark contrast between America’s ideals and its reality.

This is a memorable scene from “Four Men in Paris,” a remarkable, five-star play which dutifully earned a standing ovation. The play told the story of four African American men who moved to Paris, France to escape oppression in the U.S. and find a part of themselves that they lost in the oppression.

The four main characters were well known authors James Baldwin, Chester Himes, Oliver Harrington, and Richard Wright who played active roles in propelling the Civil Rights Movement. The play focused not only on their political voices, but on their love lives, family lives, and moments capturing the essence of the human soul.

“One of the problems that I find with public school systems is that we get a sprinkling of black history but it is not detailed enough,” said Reginald Clay, the playwright of the show, in an interview. “History works when you can get into the real stories behind what’s in the textbooks. And I think what’s special about this in a nutshell is I’m trying to pull these characters- these real people- from the pages and make them into real people. Especially if the African American audience can see these people and go ‘oh wow they’re just like me!’”

Clay did an excellent job of creating relatable characters. Everyone can relate to the heartbreaking loneliness Wright felt in the last months of his life, after his wife and child left him. Or the grieving Chester Himes felt after his fiance committed suicide before their wedding. Many can also relate to Baldwin’s internal battle of expressing and concealing his sexuality.

Baldwin, famous author of over 35 books, was portrayed as an intense, romantic, quiet, young man with deep insight. In another interview, Curtis Manning, the actor who played Baldwin, expressed the difficulties of playing such an intense character.

“Honestly just being James Baldwin… He’s the total opposite of me. I’m very bubbly and full of energy. And I have to preserve it a lot of time in rehearsal. And my director had to be like ‘keep your hands to the side. Do not move them.’ That was the hardest thing for me,” Manning said.

Later in the interview, Manning was asked about his opinion on America’s progression. The narrator Harrington had said, “America’s not perfect. But it’s close! So close to paradise!”

Manning disagreed with this message; “They say we move forward. And yes, we’ve gotten a little better. We can be in rooms with people of different color and still be nice. But there’s still a lot of secret hatred that people don’t show. On the outside, they’re welcoming. But indoors…especially with who the president is now, it’s…” he trailed off. “The only thing our generation can do is change things,” he added.

Manning agreed with one of the core themes of the play: the youth is the future. “The young people are changing,” James Baldwin said in respect to the Civil Rights Movement. “People are shedding blood so our future generations won’t have to.”

“Four Men in Paris” was an excellent integration of drama, turmoil, romance, and political themes. The play had an important message on the “Black man’s identity” and delivered it while strumming the heartstrings of the audience through light humor and reflection of the darkest shadows of the human soul.

The play was only staged one weekend from Oct. 12 to 14 at Douglas Morrison Theater in Hayward.