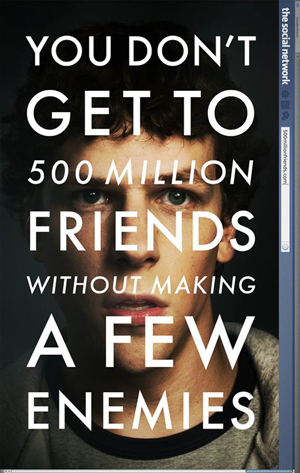 Every day, numerous amounts of people spend their time browsing Facebook, a social networking site that quickly allows one to connect with friends. But how exactly did Facebook begin?

It has been months since The Social Network has been released and it is likely that half the Castro Valley population has watched it, but because of its recent awards, I find it necessary to reiterate its possibility of being one of the greatest movies of all time.

The Social Network depicts the founding steps and the lawsuits that ensued around the popular networking website. The movie stars Jesse Eisenberg as Mark Zuckerberg, founder of Facebook, and Andrew Garfield as Eduardo Saverin, co-founder of Facebook. Both actors played their roles brilliantly and both were nominated and won many awards for their performances.

The movie flips back and forth from the past (the creation of Facebook) and the present (set during two lawsuits against Zuckerberg) which at first was difficult to understand. However, as the movie continued, the bits and pieces of the storyline gathered together to form a plot that’s surprisingly fascinating for a biographical film.

In addition to describing the beginning of Facebook, the movie portrayed the importance of friendship and how one mistake could lead to greater blunders.

I initially chose to watch The Social Network because I like Eisenberg and I am a shallow teenager. I originally had low expectations for the movie but I was surprised by the depth and quick pace of the movie and I highly recommend it to anybody who has not yet seen it.