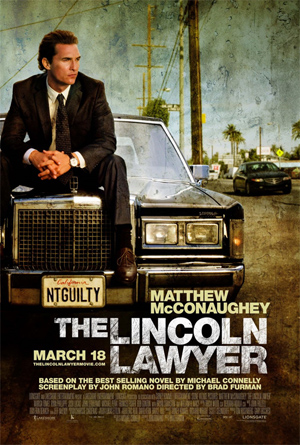 These days, when I go to the movies, I like to see something different; something fresh and new. So when I saw the trailers for the upcoming thriller, Lincoln Lawyer, starring Matthew McConaughey, I was intrigued as it didn’t look like your run of the mill courtroom thriller movie.

Unfortunately, upon going to theater and spending a good $10.00 on my ticket, I was disappointed to see that Lincoln Lawyer had fallen victim to many of the same old clichés we’ve see in movies over and over again. That’s not to say that the film wasn’t enjoyable, it just means that it had the potential to be so much more than what it was.

The film tells the story of Mick Haller, a defense lawyer (McConaughey) who is tasked to defend an alleged woman abuser (Ryan Phillippe). Haller is divorced, yet still maintains a close relationship with his wife, Maggie (Marissa Tomei) and daughter, Haley. Defending this client essentially turns Haller’s life into a living nightmare as it ruins his relationships and even causes the demise of some important characters. There’s also an added element to the film as throughout the movie we get a glimpse of what it’s like to be a defense lawyer and how unpopular of a profession it really is.

The entire movie is full of twists and turns as it tries to fool you into not knowing who you can and can’t trust. Unfortunately, every plot twist and shocking discovery is completely predictable and it’s pretty easy to determine how the movie is going to play out within watching the first half hour.

All criticism aside, there are several aspects of this film that are quite interesting. Lincoln Lawyer does a great job of reminding us why having a proper defense and a fair shake at justice is so important. Also worth noting, Matthew McConuaghey is Lincoln Lawyer’s saving grace. While you wouldn’t expect him to take such a role, he plays the part perfectly, proving that McConaughey is still an actor to be respected.

All in all I feel that this film is just all right. The ending sort of drags on and there is numerous times when the movie should have ended, but it’s still an interesting watch. Rent it.