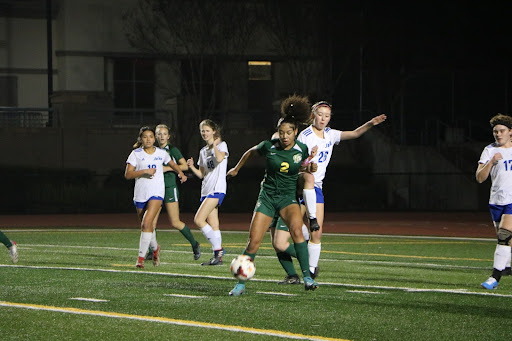 The Trojan varsity girls soccer team claimed a close 3-2 win over Encinal High School in their first home league game of the season on Thursday, Dec. 22.

It was a chilly evening on the last day of finals as the Trojans quickly took the lead with a goal 10 minutes into the game. With the loud support of the boys varsity soccer team in the stands, Castro Valley was up 3-0 by halftime.

“I thought our first half was awesome, we were moving the ball, we were connecting, there was lots of communication going on,” said coach Vanessa Amaral.

“The first half. . .was really fun to play because we were connecting and creating opportunities to score,” agreed junior Allison Mitchell, who scored the Trojans’ first goal of the night. “I think it was really cool to see how we played through and made it work.”

Unfortunately, the Trojans’ solid lead began to unravel in the second half.

“I think we got a little disorganized,” said junior Lauren Mac.

The Encinal Jets scored their first goal 18 minutes into the second half, followed by another goal nine minutes later to bring the score to 3-2. From there, it was a hard-fought battle down to the last second for the Trojans to maintain their lead.

“We made it really, really tight at the end,” reflected Amaral. “We made it a lot harder on ourselves than we needed to.”

Despite this, Amaral sees the game as a chance for the Trojans to grow as they continue competing.

“Every game’s a learning opportunity. It’s just, how do we take learning lessons from this second half and look to continue moving forward into the next game.”

Additionally, there were still excellent moments from this game and stand-out players to remember. For instance, the team’s center forward, senior Marin Michelle, scored the Trojans’ second goal—followed by a celebratory backflip—and earned an assist just minutes later.

“Marin had a really good game,” commented Amaral. “She was able to hold up the ball for us, she just had really good vision in this game, so huge shoutout to Marin.”

All in all, both coaches and players are eager to see the team grow and improve throughout the remainder of this season.

“I’m looking forward to growing and connecting with my team, and becoming a better player overall,” said Mac.

“As we continue to get games in, the team is starting to understand each other. . . so I’m super excited to see how this season takes us,” said Amaral. “As long as they stay consistent [and] focused I think they can do a lot of great things this season.”