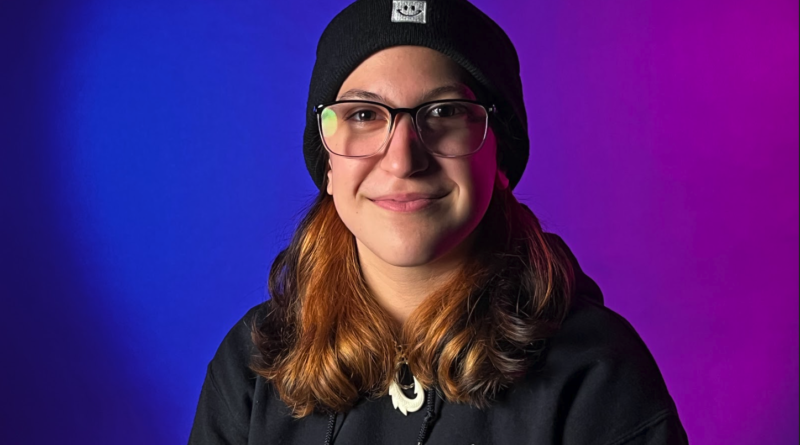 Congratulations to senior Raye Langdon, The Olympian‘s Inaugural Art and Writing Contest Winner in Short Story. Judge and senior Evan Griffith said of the piece: “The disastrous setting, the character’s confusion, and the vague timeline of events all create interest in the reader and pull them further into the story. I also enjoyed the metaphors threaded throughout the story, especially due to the fact that some of the vagueness gives the reader the opportunity to perceive these metaphors in whatever way that means the most to them.”

“This piece is about a woman who woke up in the snow while on a trip,” summarizes Langdon. “While wandering around looking for help, she comes across someone laying in the snow. When she tries to help the person, she realizes that there’s something a little too familiar about them.”

Enola sat up groggily. When she opened her eyes, pure white assaulted her vision, which definitely didn’t help with how dazed she was and how fuzzy her head felt. After sitting still for a few moments, she seemed to regain a sense of where she was, or–more accurately–what she was sitting in.

“Snow.” She said aloud as she picked some of it up and let it sit in the palm of her gloved hand. Glancing around, she didn’t see any other people or structures; probably because of the snowstorm that was happening obscuring her vision. It was miraculous how Enola didn’t feel cold as she sat in the middle of a snowstorm as bad as this–it seems like the clothes and gear she bought were good purchases after all! She hugged herself–and in turn, her large puffy brown jacket–tightly.

Ah right, she’s sitting in the middle of a snowstorm. The smart thing to do in that case would be to get out of it, wouldn’t it? Beating herself up mentally for only a moment, she managed to stand on shaky legs, starting her trek to… somewhere.

How long had she been walking for? She had no grasp on the time; though from how light it still seemed to be despite the onslaught of snow from above, she could only assume it was still daytime. Where even was she, anyway? There didn’t seem to be any civilization nearby; no people, no structures, not even a single landmark of any sort nearby. In fact, she hadn’t even seen a tree or a rock around either, and the snow below her feet didn’t even so much as sink under the weight of each step she took. Her surroundings were the same in every direction, she couldn’t even tell which way was straight or back, left or right.

An uneasy feeling laid heavy on Enola’s chest, but she pushed it down. Though she couldn’t help but wonder how she ended up in this situation; waking up face down in the snow and wandering around a barren winter wasteland. Should she go back to where she had woken up, maybe dug around the snow for any resources she may have dropped? At the moment, she didn’t have so much as a flashlight on her, maybe it would be a good idea to turn around. Considering her luck with the current path she walked, she might have better luck walking in the opposite direction… so she did.

Enola turned around, expecting to see a trail of her footprints behind her, only to be met with seemingly untouched snow. It made sense though, considering snow was still falling just as heavily as it had been before, her tracks were probably covered up fairly quickly.

With a sigh, she trudged her way back in the direction she came from.

She had been walking for what seemed like hours. How could she have thought she’d find the spot she started at so easily? Any disturbed snow would have been covered up ages ago, at this point she was just walking around aimlessly in a storm, which wasn’t a good idea to be doing, and she knew that! How could she be so stupid?

She cursed at herself under her breath, kicking her feet in frustration with every step. As she swung her leg again, it immediately struck something in the snow, causing her to stagger and nearly fall. Taking a moment to process what had just happened, she immediately dropped to her knees and began uncovering the object from the snow. It didn’t take long before Enola could make out a brown jacket.

“Hey! Are you alright?” She asked desperately, grasping the person and pulling them from the snow with a grunt of effort. They had been face down in the snow–not a good sign–so Enola did her best to flip them onto their back. She pulled the mask she had over her nose down, biting onto the edge of one of her gloves and pulling it off of her hand. Adrenaline seemed to be shielding her hand from the cold, harsh gusts of wind, which she was thankful for. She pressed two fingers to the unconscious person’s neck, feeling around for a pulse–nothing. She tried a few more times, repositioning her fingers and trying different areas of the person’s neck–still nothing.

Enola let her hands fall onto her knees. Her mind was swarming, her breath ragged and heart thrumming as she sat there deep in thought, considering what she could do in a situation like this. Absentmindedly, she examined the person’s appearance, and couldn’t help but notice the blatant similarities between both theirs and Enola’s clothing.

This person had good taste, Enola thought to herself.

Though… the fact this person wore everything she was wearing, from the same brown jacket to the black face mask unsettled her. Out of pure curiousity, she slowly reached a hand over to the person’s face with her non-gloved hand, extending a finger to pull the body’s mask down with hesitation. She let her hand hover over the person’s face for a moment, before hooking her finger into it to take it off.

A chill swept over her, but it wasn’t from the cold.

The face of the body perfectly matched Enola’s. It was a spitting image–it was her face, no doubt. Maybe she could have convinced herself this was just a doppelganger with impeccable taste in winter clothing, had it not been for the small lip scar the figure bore identical to her own. She instinctively brought a shaky hand up to her own lip and brushed it gingerly.

Enola leaped up to her feet, staggering as she turned on her heel and ran god knows where. She shouted into the air against the howling winds, for somebody, anybody, to come save her. She wanted out of wherever she was, she wanted to erase the image of the person she’d uncovered from her memory, she wanted to go home.

Enola kept shouting, kept walking, kept searching, until the winds had drowned out her cries.

One bark, two barks, then another.

“You found something girl?” Jack rushed to the large dog’s side as she came to a halt beside a mound in the snow. Breathing heavily, he lowered himself onto his knees to inspect it. With the help of his companion’s excellent digging skills, they managed to uncover what had been buried by the storm that had raged for nearly a full week.

Jack’s heart sunk at their find.

It was a girl–fairly young–wearing a thick brown jacket and black pants. Her hair was disheveled, and her face was a mix of bright red and purple, her lips an obvious blue. Jack guessed the girl may have been dead since the start of the storm–by freezing, perhaps? It seemed like a logical conclusion, given the state of her body and the recently departed storm.

“Poor girl,” He murmured, a frown settling on his wrinkled face, “I’d feel bad just leaving her here, what should we do?”

His dog barked, bringing her nose down to the snow to point at the fresh footprints and pawprints they had left on their walk here. Jack hummed to himself in thought, nodding as he stood. “I suppose you’re right. We can give her a proper burial near the cabin with the others,” He patted the dog on the head, turning back to the deceased girl and reaching down to lift her up, “help me out, won’t you?”

The two began their trek back to their cabin silently. Jack couldn’t help but wonder if there were any others who had fallen victim to the storm buried somewhere in the vastly open fields of snow; his heart twisted at the idea that there may be. Jack sighed, that was a problem for after they properly buried the unfortunate girl in their makeshift graveyard. He hoped silently that the girl’s spirit–wherever it may be–wasn’t opposed to being buried in more snow; it’s not like either of them had a choice anyway.