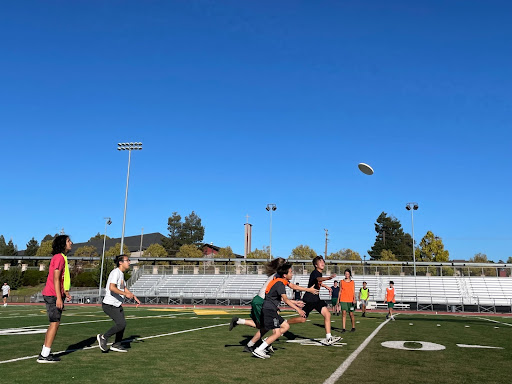 White discs soar against the blue sky on a hot Friday afternoon. Shouts ring across the stadium as students try to catch them, jumping high into the air and diving into the turf in the process. For the Wild Wombats, CVHS’s ultimate frisbee club and team, these after school practices are a mixture of fun and serious business.

“I think that people don’t realize that ultimate frisbee is an actual sport sometimes,” explained club co-president Isaac Thongthap. “Throughout my time playing, ultimate has always been a fairly ‘unpopular’ sport compared to mainstream sports like football, soccer [and] swimming.”

Ultimate frisbee, also known as ultimate, is a non-contact team sport, where points are scored by passing a frisbee to a teammate in the field endzone. The sport was first established at CVHS in 2015 as a purely recreational club. According to advisor and coach Allison Zuckerbrow, the members began to call on her experience for help learning techniques, strategies and skills, such as force and slack.

“The students definitely improved in terms of their play [as a result], and membership grew,” reported Zuckerbrow.

Then, the COVID-19 pandemic hit, and the Wombats, like most other groups on campus, were severely impacted. “During quarantine… we were definitely struggling with people,” recalled senior Timothy Hoang, who serves as co-president alongside Thongthap.

In order to combat this post-pandemic low, the club has worked extra hard to generate interest and recruit new members.

“This year we’re focusing on branching out the club, making new connections, and trying to get more people to play ultimate,” Thongthap said. Through an active social media presence and other marketing techniques, the Wombats have certainly seen huge growth in club membership, with over 40 students showing up to the first practice of the school year.

For many newer members, like sophomore Daniel Reyes, it has been challenging to learn the sport’s many throws and techniques.

For sophomore Riley Ramirez, however, her experience is uniquely affected by the sport’s gender imbalance. According to 2019 data from USA Ultimate, the national governing body of ultimate frisbee, only 32.3 percent of its over 59,000 members are female. This national trend is reflected back on the CVHS football field, where a mere glance at a Wombat practice reveals that the majority of club members is male.

“Sometimes they do pass [the frisbee to] me, but sometimes they don’t, because of the male-dominance,” Ramirez reflected. She sees this, however, as an opportunity for growth and breaking stereotypes. “I feel like it gives me more of a challenge to prove that girls can do the same things that guys can do.” And through her efforts, Ramirez happily reported, “I’m slowly getting their respect.”

While growing from these challenges, the CVHS Wombats are training for competitions ahead. Members attend these competitions, located around the Bay Area, intermittently throughout the fall and winter, but compete continuously from February to May every other weekend on Spring League. In preparation, members meet not only after school on Fridays, but Sunday mornings as well. While Fridays are mainly for playing games, Sundays are dedicated to drills and practice.

It may be hard work, but for many members, including Coach Zuckerbrow, the fun environment and community make ultimate frisbee worth it.

“The ultimate frisbee community is just a very inclusive community, a very supportive community, so it’s a really great sport to get involved in. The club here has been that way as well,” Zuckerbrow said. “So it’s just a lot of fun to come out here Fridays after school and play and run around, throw a frisbee.”