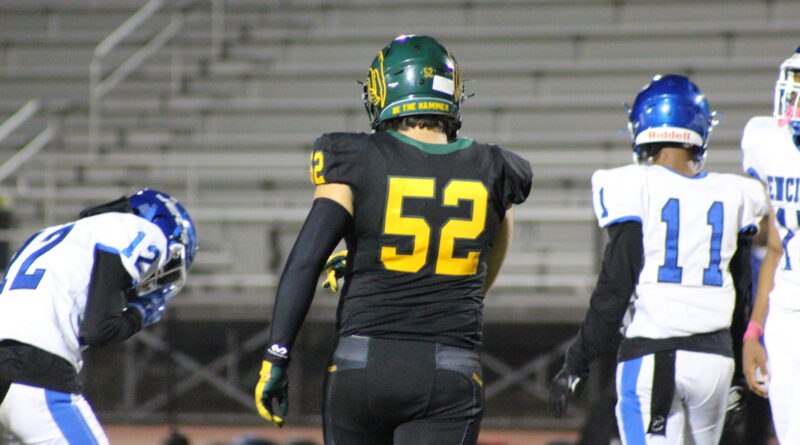 Serjio Colmenares did not initially envision himself to be a football player, as he played baseball growing up. However, when he moved to Castro Valley in fourth grade, he decided to sign up for a local intramural flag football team and give the sport a try. His experience seemingly knocked a sense into him, as Colmenares instantly fell in love with the sport and forgot all about his original baseball ambitions.

Fast forward to high school: a left guard for the varsity football team, Colmenares has quickly become a football phenomenon both on and off the field.

“Serjio is one of the most committed guys we have. He doesn’t talk a lot but he works hard, doesn’t complain, and is a team player,” said varsity football coach Denny Molzen. “He’s unselfish, hardworking, has a team first mentality and is mentally tough. Additionally, he’s an exceptional student, teammate, and young man.”

Colmenares’ football career, however, did not always move in perfect bliss. In middle school, he was cut from the sixth grade flag football team. Colmenares saw this bump in the road as a learning opportunity to grow and develop his game even further.

Now a standout senior who has been part of the CVHS football program for 4 years and currently on the varsity squad, Colmenares is a prime example of what having perseverance and a good work ethic can do.

“I love everything about it,” said Colmenares in regards to being on the school football team. “But the thing I love the most is running out of the blow-up Trojan head, seeing my family in the crowd, and seeing how proud they are of me.”

While it will be Colmenares’ last year playing for the Trojans, he continues to demonstrate a hardworking attitude to the very end. His leadership and commitment to the team will truly be missed by the coaching staff.

“He’s a glue guy. High school football teams can only be successful with young men like Serjio who does what his team asks or needs from him,” noted Molzen.

Despite not being quite decisive on his future pursuits due to prioritizing his focus on the current season, Colmenares has many ideas in mind.

“Right now I don’t have a clue, as I’m focused on making the most of this season as I can. I would love to pursue football in college, but if that doesn’t work out, I want to finish college and get a job in the field of psychology and maybe come back to Castro Valley and be a coach,” said Colmenares.

Nevertheless, whether it be through his football achievements, his positive attitude, or perhaps being the school’s next football coach, “Serjio Colmenares” will undeniably be a name known among the CVHS community.