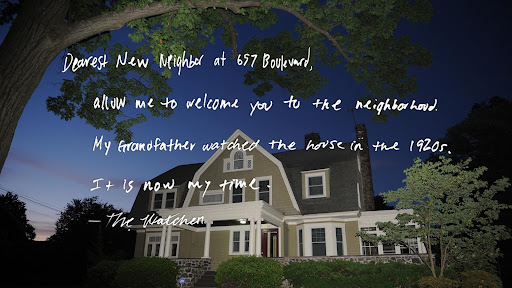 Letters. A forgotten way of communication, a personal medium for a writer to directly tell a specific reader what they want. Yet, with something so simple, letters can be scary—horrifying even. This is conveyed amazingly in the new Netflix series “The Watcher.”

“The Watcher” follows a middle-aged couple called the Brannocks. A seemingly normal family whose only  real issue is financial troubles. Dean, the husband played by Bobby Cannavale, takes out just about every loan he can to afford the family’s dream house. 657 Boulevard in Westfield, New Jersey is a place most people would love to call home. Sure, there is a bit of an eccentric population surrounding the house. The neighbors aren’t very ‘neighborly.’ But still the house is a dream come true, at least until the first letter arrives.

The letters are the driving force behind the entire story of “The Watcher.” The first shows up casually in the mailbox missing a return address. With a ripping of an envelope, viewers are sucked into a twisting, turning, crime story. The letters consist of just about every creepy thing a person could say, being intentionally ominous with phrases like, “I would be scared if I were you,” and referring to children as “young blood.” As one may guess, the Watcher claims to be watching the house through the windows. This is where the show goes completely away from the source material.

The Watcher is real, at least a real case and person. Real people were targeted and sent letters, but their names were not the Brannocks. This family was the Broadduses, and they purchased the home for much less than the Brannocks, roughly $1.5 million less. This is mostly where similarities end. There is no recorded evidence or testimony of creepy neighbors, blood cults, or previous murders in the home. The Watcher claims that they were appointed to watch the house, like their ancestors before, and that they told the previous owner to leave the house.

The Broadusses are scared, and because they aren’t in a Netflix show, they bolted out of 657 Boulevard at the speed of sound. They let the house sit vacant for six months, then finally put it on the market. It was bought surprisingly quickly. Oddly, however, the new owners haven’t reported any letters. This brings up a question posed in the show often. Did the Broadusses send the letters to themself? There is a chance, because to this day, the case remains unsolved. Viewers can see possible motivation: maybe the house was a bit too expensive for the family. Could there be a chance that the Watcher was the Broadusses? We’ll never know.

Figuring out what happened is an important part of this case, but in the end it’s all really up to speculation. The show bends the story a lot to give us lots of conclusions to come to. There are all kinds of theories someone could make before they watch the final episode, and this does in fact make the story more engaging. Just remember, if a letter arrives from an unknown sender with no return address, be careful when opening it. Ignorance is bliss, and knowing what is in that letter might just drive someone insane.