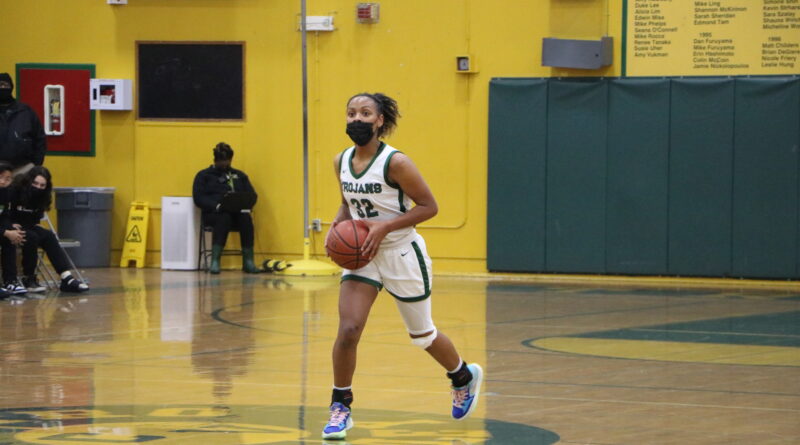 Late in the game against Amador Valley, the CVHS girls varsity basketball team, holding a small 59-53 lead, decided to initiate a full court press. The Dons’ point guard passed the ball upcourt, trying to get away from Trojan defenders. But a Trojan shield blocked the ball’s path, taking the basketball away from the opponent, leading to an easy layup.

This shield is Lauren Green, the head team captain on the girls basketball team. She plays a “point/swing guard who averages 20 points per game, 10 rebounds per game, 6.3 steals per game,” said coach James Foster. Recently, Green had a monster game against Arroyo, scoring 30 points.

“Lauren is a rare type of student who combines talent and natural ability with a willingness and eagerness to learn,” said Foster, who described Green as “a dynamic athlete and known to arrive to practice early and work late to improve her skill.”

To call Green dynamic would be an understatement, and that does not just apply on the court, but off the court as well. When Green was still an underclassman, while standing in P.E. class, she noticed that not everyone had the necessities they needed to have a great day. Seeing this she wanted to ensure one thing: “that no student on campus would have to struggle.”

Noticing this, she founded the Community Closet, a program in the Wellness Center where students “can get hygienic products…clothing, shoes, and…food” to ensure that “every student on campus would have the resources needed to have a successful day.” This is just one example that proves Lauren Green’s great leadership abilities, both off and on the court.

Green is also a dual athlete, playing volleyball in addition to basketball. “She was a leader on the team [and is] very confident in what she does,” said CVHS mathematics teacher Kelley O’Hern, whose daughter played volleyball with Green. “That’s what compels her into being ASB president,” she continued, “She seems very open and compassionate [and] is willing to admit when she makes mistakes and to correct things.”

As for the future, Green hopes that her teammates can recover from their injuries, and to go to the NCS playoffs at the end of the season. “As long as we are playing hard in our league, I believe we can do it,” she said.

Castro Valley’s next game will be on Thursday, Jan. 20, versus Mt. Eden here at CVHS.