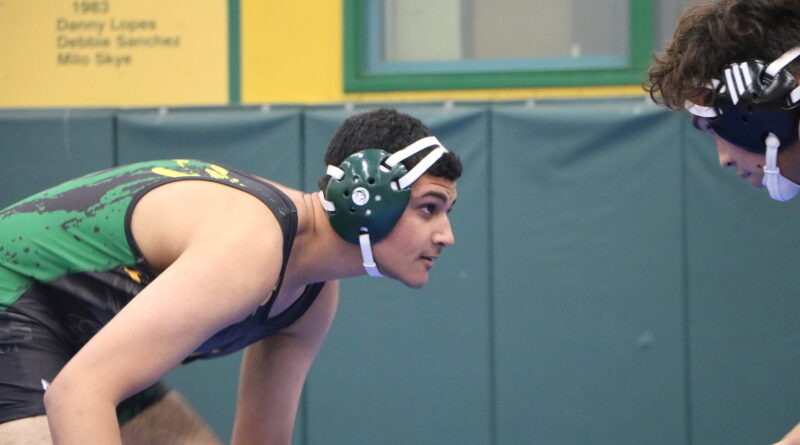 The Trojans smashed their opponents at their meet on Dec. 10. They competed against Mt. Eden Monarchs and the San Leandro Pirates, and fought tooth and nail to win almost all their matches. The Trojan seniors won nine out of their ten matches.

It was an emotional senior night; all the senior athletes got to stand with their parents, friends, and fellow athletes at one of their final wrestling meets at home as a sendoff. Despite it being senior night, the Trojan wrestlers still have an entire season ahead of them to improve and make memories.

The senior athletes were incredible in the ring, winning almost every single one of their matches. People dove through legs and tackled each other, and some of our poor opponents were picked up and dropped. The entire gymnasium was electric, the crowd was supportive and as loud as they could be.

“I feel like I did well in my match overall, especially because I won. I still feel like I need to improve on committing to my shots and becoming more aggressive,” said Giselle Quintero, a fierce junior Lady Trojan, who had a lengthy match that she eventually claimed victory over her opponent.

The athletes are constantly looking for ways to improve, learning from both their losses and victories.

“In my last match my legs started to get tired so I have to work on my cardio,” said senior wrestler Skyler Lum.

This victory is an important one as one of the hardest teams to beat, San Leandro, was beaten handily by the Trojans.

“Our team won both duels. San Leandro is going to be our biggest challenge and we defeated them, all but ensuring a league championship,” wrestling coach Josh Wheeler said proudly. “Our seniors, Skyler Lum, AJ Anderson, Jack Clarke, Alex Umansky, and Kyle Jeong went 9 to 1 in the two duals.”

This season is definitely going to be worth keeping an eye on.