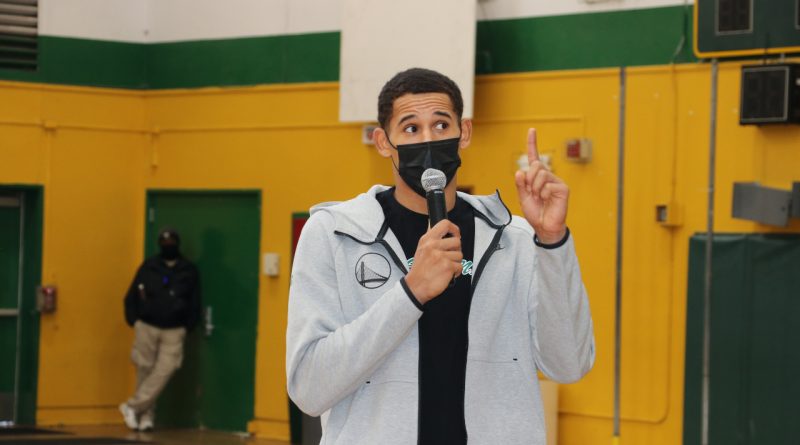 CVHS alum Juan Toscano-Anderson has it all: he’s a star of the Golden State Warriors, signing a multimillion dollar two-year contract in the spring. However, there’s more to him than basketball.

In mid-2020, Toscano-Anderson decided to use his platform to organize a march in his hometown of Oakland following the historic murder of George Floyd. On paper it was a Black Lives Matter march, but he says that to him, it had a greater meaning.

Toscano-Anderson visited CVHS on Thursday, Nov 4. Trojans basketball players as well as several teachers gathered in the gym during sixth period to hear him speak.

Toscano-Anderson’s refreshingly candid conversation included everything from his pre-game habit of brushing his teeth to his experience with the NBA recruitment process to his work as an activist. He brought a down-to-earth focus to the importance of mental health, not just in basketball, but in everyday life.

“I’m so happy to be here,” he began. The way he talked about CVHS proved his statement to be genuine. “I would trade everything I’ve got right now—Juan Toscano-Anderson of the Warriors—to be Juan Anderson at Castro Valley High School again.”

He credits his former teacher Carmelina Frasca, who was watching him proudly from the bleachers, for teaching him as a teenager that nothing was going to just be given to him—he would have to work for it.

“I got Ms. Frasca—that’s the reason I’m here. One of my favorite teachers, and she’s just a great person,” he said. “I will always take that with me because I was one of those kids: I was an athlete, a jock, I thought I was so cool. But things don’t happen overnight. You plant that seed and you nurture it—you nurture your dream by putting in the work. It just takes persistence.”

Toscano-Anderson advised the basketball players in the audience to remember the importance of their education, unlike he did; when he was at CVHS he didn’t care about anything but the game.

“Seventeen years old, I’m not even thinking about getting a college degree. I’m a star athlete—I’m thinking about going to the league and getting paid,” he recalled. “But my mom said, ‘I don’t care about basketball. I want my son to graduate college.’”

Toscano-Anderson graduated from CVHS in 2011 and attended Marquette University where he pursued a bachelor’s degree in criminology while playing basketball for the Golden Eagles. Following his four years there, he played on teams in Mexico, Venezuela, and Santa Cruz. He signed with the Warriors in 2020.

Toscano-Anderson concluded his conversation with some words of wisdom for the students. “You don’t have to have the answers today. Nobody has the answers. I didn’t know I was going to the NBA—I’m 28, I got to the NBA when I was 26. That’s eight years after high school,” he told them. “If I could give you guys any advice, the main thing I would say is to enjoy your life. You’re only going to be truly successful if you wake up and you’re optimistic.”

CVHS social studies teacher Sarah Burke was impressed and inspired by Toscano-Anderson. “He was so well-spoken and thoughtful, and he had such wonderful advice,” she said. “It was a really amazing experience.”

4 thoughts on “Warriors star: “Everyone should have the right to pursue happiness””