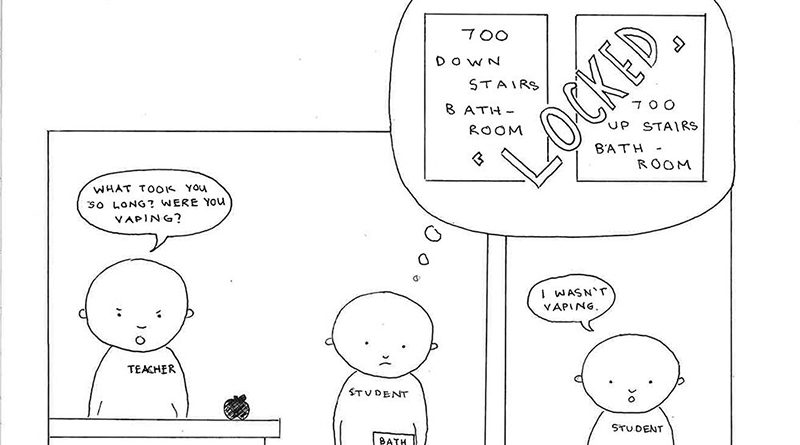 In recent years, the rise of vaping amongst students hasn’t gone unnoticed, and the school administration has certainly taken efforts to curb this. But are these methods truly effective, or even worth the consequences?

Over the past few years, the administration’s attempts to stop vaping on campus have centered around the school bathrooms. One measure includes locking doors to restrooms in an effort to supplement the routes taken by staff patrolling the campus, as a way of reducing the number of unwatched areas. This sometimes results in a mere one open bathroom after school to serve the 3,000+ student body.

The Olympian believes these, and the majority of the other measures taken to stop vapers on campus, are largely ineffective. Locked doors may prevent potential vapers from polluting the air in these public restrooms, but it also prevents the rest of the school’s students, who are far larger in number than the relatively low amounts of vapers, from utilizing them for their actual purpose. This forces students to find other restrooms and lengthens already long lines. Ordinary students on their way to the restroom are trailed and scrutinized like vandals by supervising staff members. It might be possible to allow more open restrooms if more staff were patrolling, or if sensors were installed to detect vaping, but that would not only be costly, but brings us to another, more pressing issue.

If offenders know that the bathrooms are protected by locks and patrols, there is little to stop them from simply finding another quiet, isolated spot where they can’t be caught as easily. Some have even taken to vaping in classrooms, where a number of faculty are unable to recognize its scent. But perhaps we’re looking at this issue the wrong way. The Olympian believes that it may be more effective to tackle this problem not as a criminal issue, but as a health issue.

Instead of hunting the halls for students vaping, when they can easily hide their contraband and actions at a moment’s notice, The Olympian suggests a greater effort should be taken by the school to notify students of the dangers involved in vaping, that it’s not just a harmless vice, as is commonly believed, whether this be through announcements, fliers, or whatever other methods the administration sees fit. Despite recent efforts to raise awareness, few know of the Wellness Center’s offered intervention for substance use, let alone the fact that one exists for students on campus at all.

This is something which simply cannot be enforced effectively. While we cannot force many students to stop vaping, we can help them make the choice not to do so. It took generations to bring tobacco to where it stands now, and it may take years before we bring vaping to the same place. By stigmatizing this behavior, we aid the process. When more take a stance against it, more will report it, and more still will actively choose not to vape. We believe students will realize the detriments with time and awareness, not with force.