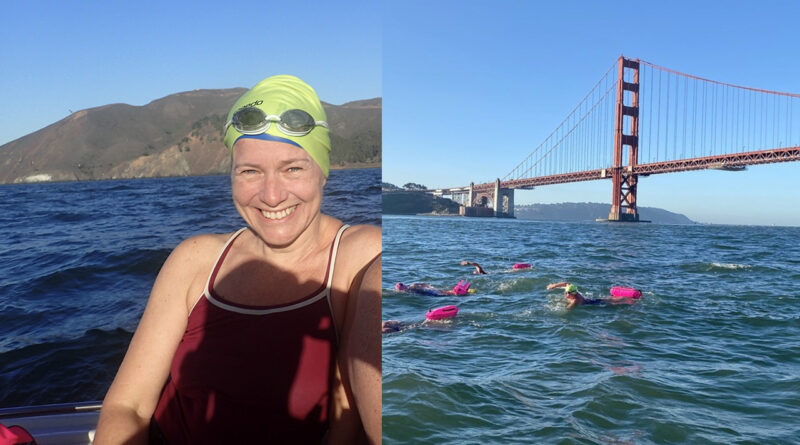 CVHS English teacher Amanda Staab completed a seven-mile swim from the Golden Gate Bridge to the Bay Bridge in November.

“We had a boat guide, and she took us out to the side of the Golden Gate Bridge, and we jumped off the boat. We swam towards Alcatraz, and then turned and went towards the Bay Bridge,” said Staab.

Staab, along with her small group of swimmers, swam through the cold water in the bay, with temperatures of only 55 degrees.

The most difficult aspect of the swim was the water temperature. With the water in the bay being only 55 degrees, “the cold is pretty intense,” she said.

“Another thing people don’t realize is that the tide can either really help or really hurt,” said Staab. During this swim, the tide was flowing with them, so she was able to swim four miles per hour compared to her normal speed of two miles per hour.

This swim was the longest that Staab has ever completed, with the closest being a 2.7 mile swim across Donner Lake, that she usually swims every summer.

She got into long distance swimming from her masters swim team. The US Masters Swimming organization sponsors open water swims in the summers, and in prior years, Staab competed in three to four races every summer, along with a bit of practice on her own.

Staab found swimming in the bay to be a therapeutic activity, especially in the spring.

“It was something I could do that was safe, and was outside. It’s a good challenge, to be able to go ‘I’m going to go that far,’” said Staab.

With public pools being closed due to the pandemic, she found herself open water swimming more often.

After completing her swim, she learned that the swimmers were being followed by a group of porpoises, and she had no idea that they were even there during the swim.