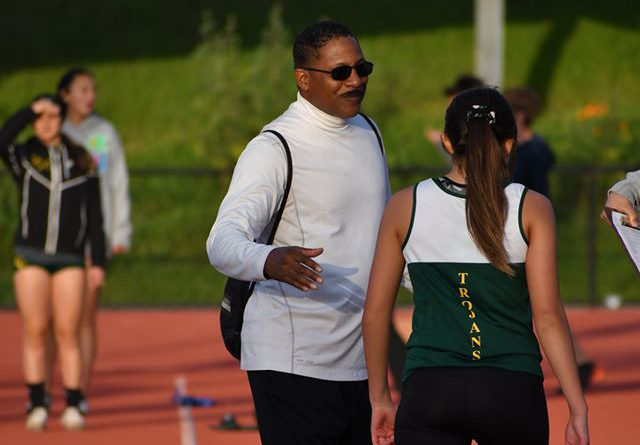 Coach of the CVHS track and field team Dooney Jones has helped many athletes achieve their goals and compete at the highest level. He was recently inducted into the Castro Valley Sports Foundation Hall of Fame as a part of the 2020 class.

He has coached four state champions and tutored the 2014 boys 400-meter relay team to a second place finish at the state championships. Jones finished that season as the Bay Area News Group East Bay boys track and field coach of the year.

“I absolutely love what I’m doing. I’d rather be coaching than anything else,” said Jones.

Jones first coached track and field a few years after his 1982 graduation at Mt. Eden High School. He then moved on to coach at James Logan High School where he coached his first state champion in the triple jump.

The CVHS track team has been impressive ever since he entered the program. He started coaching at CVHS in 2010.

Senior Rylan Boyd praised Jones’ coaching style. “He is committed to giving everyone the motivation to reach their goal,” said Boyd.

Jones coached the Castro Valley Track Club before officially becoming the coach at the high school.

Jones ended up at CVHS because of his daughters; he wanted to spend more time with them so he ended up coaching the team. One of his daughters, Kennedy Jones, won the state championship in the triple jump in 2015.

Many students had the opportunity to compete at NCS last season and Jones hopes to see more CVHS students participate and win their events.

The induction banquet for the Castro Valley Sports Foundation Hall of Fame will occur in April. Inductees are chosen every two years ever since the first class in 2010. Jones is one of 16 new members to the Hall of Fame in 2020.

One thought on “Track coach races to Hall of Fame”