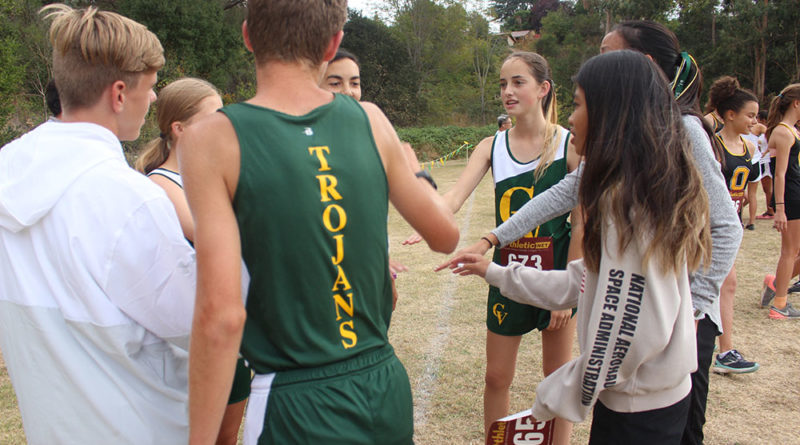 Members of the cross country teams ran their hearts out at Hayward High School on Oct. 16. Although they only placed fifth in both of the varsity boys division and girls varsity division, runners broke many personal records.

Freshman Cameron Huynh has had an extraordinary start to her high school cross country career. Already running on varsity, she beat her three-mile personal record by 40.3 seconds, finishing her run in 19 minutes and 20 seconds. Huyuh placed seventh in the entire varsity girls race and first out of all the Trojan girls.

“Cameron is always pushing herself to improve and she is an amazing addition to the team,” said junior Sophia Siopack.

Sophomore Stephanie Curpene also earned a personal record in the girls varsity race. She also ran the three-mile race, and got a time of 20 minutes and 40 seconds. This is a 57 second improvement from her previous year’s record. Curpene has only been improving from her past times.

Freshman Jacob Bull ran the fastest three-mile out of all the runners on the boys varsity team. He ran a 16 minutes and 52 seconds, placing ninth overall and first of the CVHS runners.

Senior Christopher “CJ” Conley placed 12th overall and second out of the boys on the CVHS team. Conley had a huge improvement from his season last year. Last year, his record for a three-mile race was 17 minutes and 34 seconds. At this meet, he ran a 17 minutes and 17 second race.

If you want to come support the Trojans runners, their next meet will be Wednesday, Oct. 30 at Oyster Bay. They also have WACC Championships on Saturday, Nov. 9 at Hayward High School.