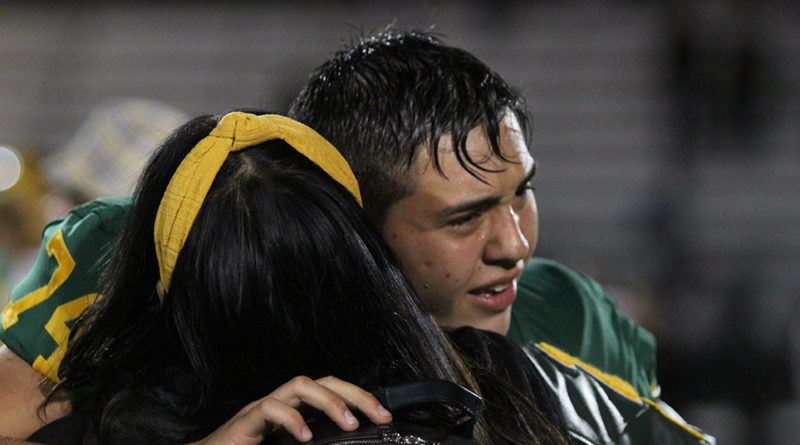 Crazed fans raced to the field, hopping the fences, and crowding around their winning team. Players hugged their loved ones, tears of joy streaming down their faces. The overwhelming crowd began chanting, “WHO’S YOUR DADDY? CASTRO VALLEY!” All this happened because the Trojans varsity football team achieved a thrilling comeback and beat the Berkeley Yellow Jackets, 21-20, in the homecoming game on Oct. 11.

“This was the seniors’ last homecoming game and we knew we had to leave everything out there. After being down by 14, it was important for us to remember who we play for. Everyone has something that pushes us,” said senior defensive end Josh Lozano, who sacked Berkeley’s quarterback twice. During the post-game celebration, Lozano embraced his mom with joy.

After a scoreless first half, the Trojans quickly fell behind 14-0 in the third quarter.

They managed to tie up the game by the end of the fourth quarter, putting the game into overtime. The Yellow Jackets and Trojans were neck and neck during overtime, but a touchdown by Victor Rivera and extra point kick by Griffin Hastings won the game.

The first quarter was a defensive battle with little yardage gained by either side.

The second quarter started with an impressive Trojan drive that ended in a missed field goal. Later in the quarter, after a long run by running back Zach Sandoval, the Trojans fumbled the ball away on a play that led to tight end Max Martinez’s knee injury. Berkeley’s succeeding drive ended with a stop on fourth down by defensive lineman Joey Speer.

Neither team had scored by half time, and the crowd’s spirits were high. The Trojan Den was so excited that they broke seven bleacher benches while cheering on their team.

During the third quarter, Berkeley took the lead with a touchdown. After a three and out by the Trojans, Berkeley drove down the field and the Yellow Jackets’ running back Donte Searcy scored another touchdown. The Trojans had a punt blocked and fumbled the ball. On Berkeley’s next drive, the Yellow Jackets charged down the field. Down 14-0, the Trojans’ prospects to win looked very poor.

“After being down 14-0, we believed we could still pull through,” said the Trojans’ David Torres Perez. “We played the rest of the second half as if the game was tied at 0-0. Every play was important.”

The game turned when Rivera, playing at safety, intercepted a pass at the goal line. Then quarterback Bobby Selba completed a long pass to wide receiver Wesley Breault, moving the Trojans into scoring position.

After the end of the third quarter, Selba scored a touchdown to put Castro Valley on the board. An extra point from Hastings put the score at 14-7. A touchdown from running back Zach Sandoval on the Trojans’ next drive followed by another extra point tied the game at 14.

Following a sack by Lozano that gave the Trojans the ball, time ran out, seemingly ending the game with a tie. The referees surprisingly decided to send the game into overtime, raising spirits for both the crowd and the team.

During overtime, the Yellow Jackets scored a touchdown, but their attempted two point conversion failed.

Then the Trojans’ Rivera scored a touchdown, tying the game at 20. Hastings kicked the winning extra point, and the crowd rushed to the field to congratulate their team on a game well won.

“Being down two touchdowns at the start of the fourth quarter, we knew we could still come back. All we needed was a score, stop on defense, and another score. What also played a big role was belief. We never stopped believing,” said junior wide receiver Christian Granados.