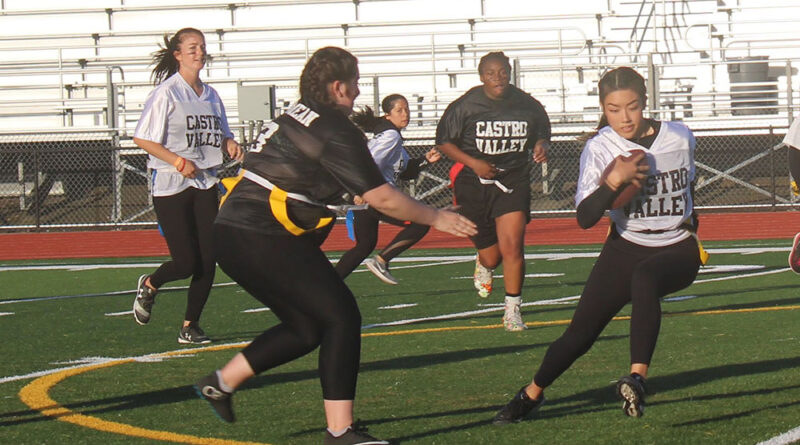 The 2019 annual CVHS Ladies Flag Football game was a hit. The girls on both teams showed both their spirit and prowess on the field.

The game was off to a fast start with senior Sydney Burnama giving a 30-yard pass to her teammate on the sophomore/senior side. With two minutes left in the first quarter, Burnama scored a touchdown for the sophomore/senior team. Senior Terra Finnegan-Canepa scored two extra points, making the score 8-0 going into the second quarter.

Most of the second quarter was fiercely contested, with both sides gaining few yards. In the last seventeen seconds of the first half, the freshmen/junior team scored a touchdown but missed the extra point. With only seconds to go until halftime it was expected that the half would end 8-6, but with less than five seconds left Burnama scored another touchdown, giving the sophomore/senior team a 14-6 lead.

The spirit boys performed at halftime led by choreographers Lindsay Lavine, Makena Rutishauser, Janelle Vallortigara, and Karisa Vallortigara. The boys performed numbers instantly recognizable as those done by cheerleaders many times while also including many of their own unique performances. Winner of most spirited spirit boy Michael Patterson thanked all of the choreographers, saying that they “couldn’t have done it without them.” He went on to say, “I think it is a really good opportunity to bring our school together and hopefully learn that everything is not so serious all the time and that it’s just fun.”

After the game senior Nadia Morando-Hernandez remarked, “I got to learn how to play football so that was interesting. I also got to meet girls that I wouldn’t have met otherwise.” She also rejoiced around the fact that playing for the team was “a nice break from school and homework.”