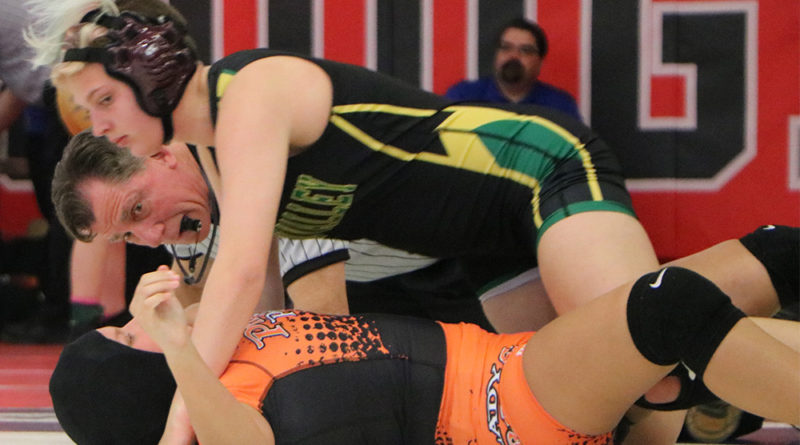 Olivia Ott competed into the semi-finals in quadruple overtime, in the Kusumoto Klassic tournament,  seizing the moment by finally pinning her opponent down and winning the match.

Ott started wrestling when she was in sixth grade, and has liked it ever since. Her interest began when she saw the sign up sheet, and decided to do something new. Taking a chance with such an aggressive sport, she became one of the best wrestlers at CVHS.

Ott has a leading record of 16-8 at 150-pound weight class, with an astonishing 15 pins. She loves her team and loves her coaches.  Ott doesn’t like to brag about her strengths, but her ability to take over the mat tells it all.

She’s had a captivating season, dominating her weight class and scoring very high for her team. Usually wrestlers have a hard time making weight, but that’s something that Ott overcomes  well.

“I’ve always been at my weight, so I never had a problem with it,” she explained.

She practices non stop everyday for hours at a time, putting in a lot of effort. She has worked really hard to get where she’s at, and doesn’t leave the mat room unsatisfied.

Her teammates and coaches are love her, and have nothing but supportive things to say about Ott.

“She’s one of the most supportive people I know. If you’re upset, she’ll be the first person to cheer you up,” teammate Evy Esparza said.

Her coaches have no hard times with her,and is amazing to coach. They work with her in and out of practice, to become a better wrestler and person.

“She’s hard working and very talented. Outside of school she plays in the Oakland Youth Orchestra. She’s an awesome captain and very energetic. She’ll work with her teammates, even if she has no work to do herself,” coach Summer Scott states.

Ott’s hard work and dedication has paid off, because this year she competed at Albany High School for NCS, finishing seventh. Next year she intends to do even better and reach the state championships.