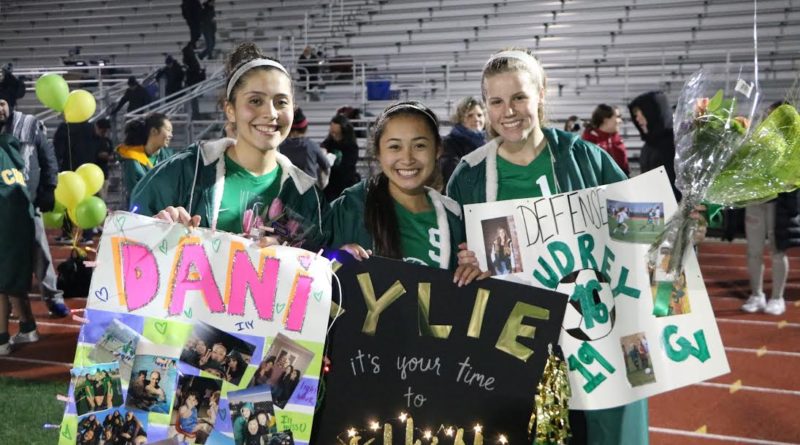 The CVHS girls varsity soccer team’s senior night ended in a tie against O’Dowd on Feb.7, with the final score of 2-2. With bleachers of supportive family and friends, a national anthem performance by the CVHS Madrigals, a halftime skit with parents of seniors, and a hardfought, high intensity match against bitter rivals, senior night was a memorable night for players and spectators alike.

The program began by announcing the five seniors graduating the team: Terra Finnegan-Canepa, Kennessy Irvin, Kylie Rojas, Audrey Vance, and Daniella Vallejo, and their future plans, including attending college, becoming nurses, even running for president! Each player on the team was accompanied on the field by a youth Castro Valley Soccer Club player, who took were employed as ball girls during the game.

After remaining scoreless in the first half, the first goal is scored by Rojas seven minutes in to the second half. However, the game is tied after an O’Dowd goal with 11 minutes left. After another O’Dowd goal, the Trojans picked up the intensity and earned a penalty kick, scored by junior Juliette Torres. After many close attempts and shots at goal, the game ended as a tie.

“Despite being one point down, we didn’t give up, instead fought back to ultimately end the game in a tie which was a good result against a good, quality team. Everyone played a key part in that resilience aspect and it was great to see. I am excited for the team as we now move onto the first round on NCS this Wednesday,” said coach Vanessa Amaral.

But for the seniors, the most memorable part of the night was the support from friends, family, and teammates, and recognition of their accomplishments within the soccer program.

“It was such a fun night that I will remember for the rest of my life. As a senior I was really feeling the love, and I feel grateful to have the support I do and couldn’t have asked for a better season. I will miss playing alongside such great players and even better friends!” said senior and captain Audrey Vance.