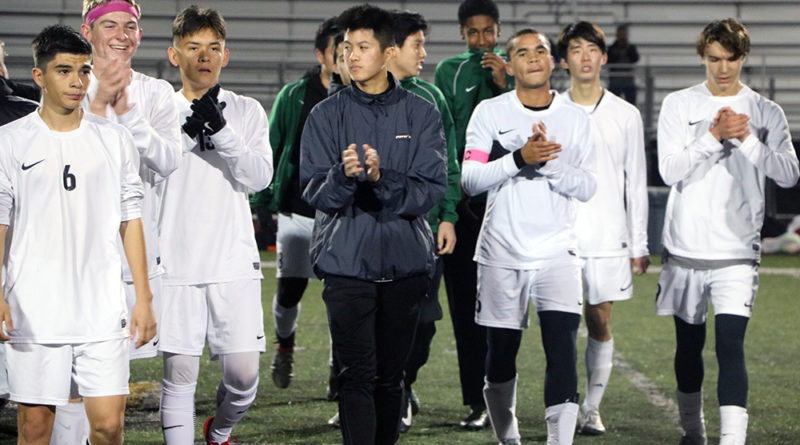 The boys varsity soccer team went head to head with Arroyo High on Jan. 10 at CVHS. Tensions and frustration among the players and the coaches arose as Arroyo made the first goal of the game immediately once the game started.

The Trojans were persistent in making a goal as the tension and excitement began to rise, and junior Hayate Moro, who plays left or right back, went for a last minute victory. Players stood eagerly waiting for the shot and players on the field made sure Moro had all of the support he needed. Moro made the goal, ending the game with tie of 1-1.

The boys were on full focus as they battled on the field, trying to get a goal. With each shot missed or stolen from them, still they had constant effort to get back up on the field. They showed not only their clear dedication to the game, but also great communication between the players.

“As a team we worked really hard 95 percent of the game. Our perseverance came through, because at the very end of the game we pulled off a goal and tied. Ultimately, we showed that we didn’t give up,” captain senior Miles Sowunmi Ogle said.

Although the team tried to make a goal, Arroyo had a tactic of wasting time. It looked as if the plan was working as the time slowly came to an end. But once the second half of the game started, the Trojans boys began to not only encourage one another on and off the field, but also to come back with the determination to make a goal.

“I felt like we kept our heads in it, we didn’t crack under the imminent fact that we were down 1-0, and we kept fighting till the end,” said senior Gaspar Gomez who plays either defender or left or right back.

It’s clear that the Trojans are determined to fight. Their persistence for working and encouraging each other on the field showed in the game, and in overall team performance.