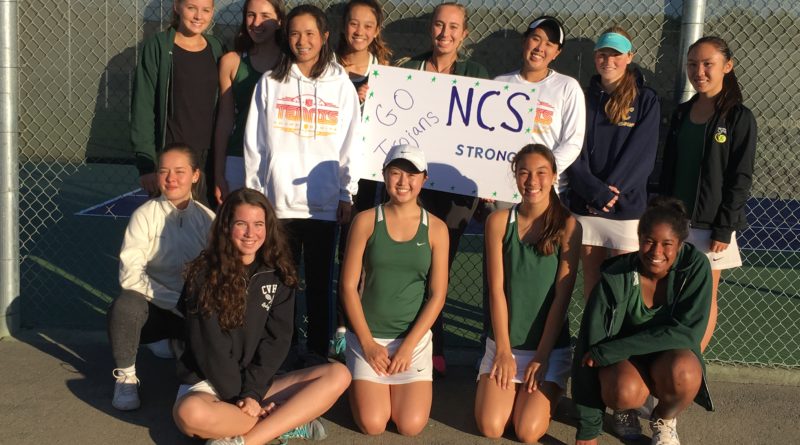 The girls tennis team finished the 2017 season second place in the league, with 17 wins and only four loses. This season was among the most sucessful for CVHS girls tennis in recent years.

“This year was definitely one of the best,” said senior and varsity captain, Rachel Dong.

Besides succeeding during the regular season, girls from the team also placed in the Western Alameda County Championship (WACC), North Coast Section (NCS), and were recognized by other teams in the league.

At the of the end of every season, coaches from all teams in the league choose six girls to recognize as All League Players. This year, four of the six All League Player Award recipients were from CVHS. Dong and sophomore Elena Lottich won for singles players. Varsity captain and senior Riley Powers and junior Victoria Vitton won for doubles. Senior Samantha Cheung and senior and varsity captain Lauren Fung were also recognized with All League Honorable Mentions.

At WACC, Lottich won the entire championship for singles.

“I felt really proud,” said Lottich. “It was a confirmation and a confidence booster that the amount of time I spend playing tennis is paying off.”

Dong and Lottich both went on to play in NCS. After losing to the number one player from California High School, Lottich competed against another top player for third place. Lottich finished the match with ease, a 6-1 score for both sets, and the title of third place at NCS.

“I was a little bummed about not getting first which is of course the ideal goal, but I was still really proud of what I accomplished this season,” said Lottich. “I’m ending on a high note that I hope to carry on throughout the year.”