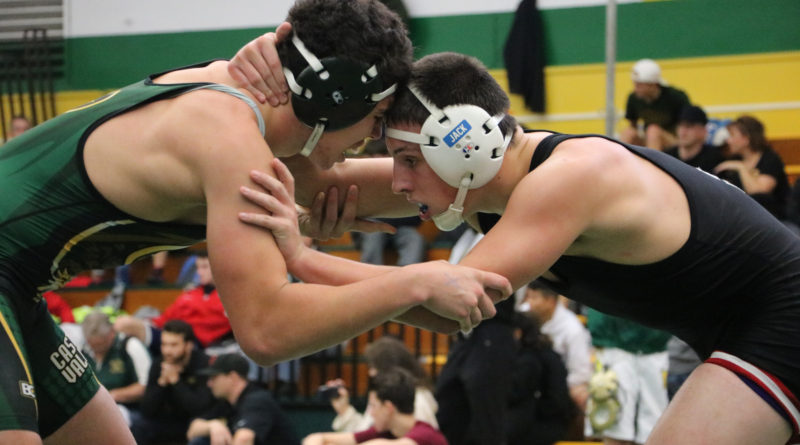 The CVHS boys varsity wrestling team participated in the 54th annual Bay Area Wrestling Tournament, hosted at CVHS on Dec. 10. Over 30 schools were represented. The Trojans truly impressed, as some placed high in what is considered one of the more competitive tournaments of the season. CVHS placed fifth in the tournament overall.

In the lighter brackets, freshman Leiland Thomas and team captain Steven Decker both placed high among the pack. Thomas placed third in the 113-pound with a 3-1 record, two wins by pin. Senior Decker placed second in a tough match battle in the championship round, and finished with a 3-1 record, winning by pin in all three matches.

In the middle-weight brackets, freshman Kristopher Darrin and junior Alex Sousa made their way to the front of the packs. Darrin placed fourth in the 132-pound bracket, with a record of 2-2. Captain Sousa placed second in the 160-pound bracket after a long series of tough matches, one including a clutch 12-11 win in the semi-finals, which almost erupted into a fight after the match. Sousa ended the day with a 3-1 record, including one win by pin.

In the upper-weight brackets, junior Charles Alejo placed third in the 170-pound bracket with a 3-1 record, with two wins by pin.

As one can imagine, wrestling three to five matches in a day can be very tiring for the athletes, but that doesn’t stop the wrestlers from leaving everything on the mats.

“It’s pretty tiring, but you don’t worry about how many matches you’ll wrestle,” said Decker. “You worry about the match that you’re wrestling, taking it one step at a time.”

At a crowded and popular tournament such as this, the wrestlers do their best to stay focused, especially when trailing in score.

“It’s important not to focus on the yelling or cheering when you’re at a tournament like this. You have to try to listen to your coaches and focus on your match no matter what,” explained Decker.

One thought on “Boys wrestling does well in tournament”